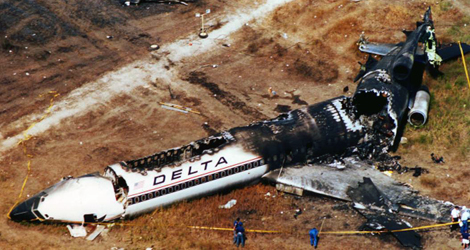 About 0901 central day light time on August 31, 1988, Delta Airlines flight DL1141 crashed shortly after lifting off from runway 18L at the Dallas-Fort Worth International Airport Texas.

Delta Airlines flight DL1141 crew reported that the take off roll appeared to be normal in all aspects, with no warning lights, audible warnings , or unusual engine instrument conditions .

The captain stated that the rotation was initially normal , but as the main gear wherels left the ground he heard “two explosions.” He said it felt as though the air plane was experiencing “reverse thrust.”

The captain of Delta Airlines flight DL1141 stated that the airplane began to “roll violently. “

Delta Airlines flight DL1141 struck the instrument landing system (ILS) localizer antenna array approximately 1,000 feet beyond the end of runway 18L , and came to rest about 3,200 feet beyond the departure end of the runway.

The flight was airborne approximately  from lift off to the first ground impact near the ILS localizer antenna. The airplane was destroyed by impact forces and the post crash fire.

Contributing to the accident was Delta’s slow implementation of necessary modifications to its operating procedures, manuals, checklists, training, and crew checking programs which was necessitated by significant changes in the airline following rapid growth and merger.