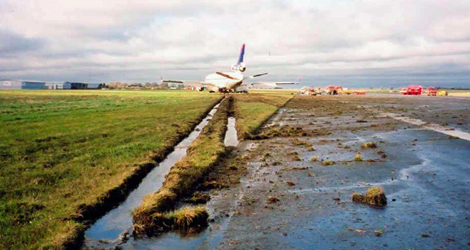 Delta Airlines flight DL129 was on a scheduled public transport flight from Atlanta Georgia (ATL) in the USA, to Dublin Airport (EIDW), with a planned transit to Shannon Airport (EINN) and return to ATL.

A total of 3 flight crew, including a Relief First Officer (RFO), 11 flight attendants and 167 passengers were onboard. The departure from ATL at 8.00 (L) and the en-route segment of the flight was uneventful. At 07.31 hours the flight crew, which at that time, consisted of the Captain (PF) and the RFO, pilot-not-flying (PNF), copied the 07.00 hours landing conditions for RWY 10 at EIDW from the Automatic Terminal Information Service (ATIS), Information “Delta”.

The Flight Management System (FMS) was configured for RWY 10. Approximately three minutes prior to Delta Airlines flight DL129 requesting descent, the First Officer (FO) returned from his rest station in the cabin and took up his position as FO, PNF. The RFO initially re-positioned himself into the left-hand seat, to allow the Captain to take a bathroom break. He updated the FO on the current situation and then, on the Captain’s return, the RFO took up position in the relief seat behind the two main cockpit seats.

At 07.35 hours, Shannon Centre cleared Delta Airlines flight DL129 for its descent down to FL150. During the initial descent, the flight crew commenced the approach/landing briefing for RWY 10 at EIDW. As part of this briefing, the Captain set a target/reference speed for final approach Vapp (Flap 50º) of Vref + 5 knots (148 KT). The Captain also initially called for auto-brakes to be set to medium (MED) braking.

However, after a brief discussion with the RFO, the Captain agreed that auto-braking should be set for minimum (MIN). 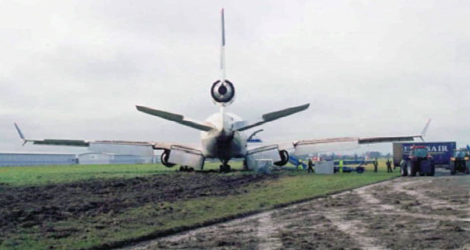 At 07.39 hours, Shannon Centre issued a Sigmet (Significant Weather Information) on frequency advising that, “Severe turbulence below FL 90 had been observed North of 53º moving North at 20 KT”.

The RFO relayed this information to the Senior Flight Attendant (SFA), requesting that a cabin announcement be made advising the passengers of the possibility of encountering turbulence and to ensure that all passengers were seated 10 minutes before landing with their seat belts fastened. This was done. At about 07.44 hours, N803DE was handed over from Shannon Centre to Dublin Area Radar and was cleared via Killiney (KLY) for a landing RWY 28.

With the change in runway, the FMS was reconfigured from RWY 10 to RWY 28 and the flight crew commenced an approach/landing briefing for RWY 28. Apart for the procedural requirements for RWY 28, the approach/landing briefing was the same as carried out earlier for RWY 10. The 07.30 hours ATIS Information “Echo” became available about this time, however, there is no record of the flight crew copying this information.

Auto-pilot (AP) disconnect occurred about 25 seconds prior to main wheel touch-on, at a radio altitude (RA) height of approximately 362 feet – above ground level (AGL). A short time later, at approximately 08.04:37 hours, the aircraft touched down RWY 28 and in the words of the Captain, “It was a firm centreline landing, within the touchdown zone”.

Approximately 3 seconds after touchdown, the FO confirmed “Spoilers out” and “Three in reverse” thereby indicating that the ground spoilers had fully deployed and that the three engines were providing reverse thrust. The Captain then called out that “…it’s slippery”, as the aircraft started drifting initially to the right and then to the left.

At about 10 seconds after touchdown and with spoilers and reverse thrust fully deployed, the aircraft was subjected to a sudden and violent gust of wind from the left, which was approximately 23 KT above the reported landing wind of 210º/20 KT. This particular gust was unforeseeable and unexpected.

Inputs from the Captain, consisting of full right rudder and right tiller, failed to arrest the drift to the left and the aircraft departed the paved surface on an indicated heading of approximately 270, at a point halfway abeam Taxiway E5 and E63.

Delta Airlines flight DL129 continued through the prepared graded ground, which was rain soaked, for a distance of approximately 250 metres before finally coming to a halt at approximately 08.05:13 hours.

The RFO immediately asked the Captain if he required “Engines off/Auxiliary Power Unit (APU) on”. The Captain replied, “Affirmative, tell them to remain seated” and this action was carried out by the RFO, with the FO calling out the shutdown checks.

The cause of the runway excursion was that the aircraft was subjected to an unexpected and sudden wind gust during the initial stages of the landing rollout, inducing a rate of yaw to the left, which could not be controlled by the pilot flying.

Air Canada flight AC848 was a line flight from Toronto Pearson to London Heathrow on 28-01-2008, a Boeing B767-333 (C-FMXC). During the pre-flight preparations there was a potential for the flight to depart behind schedule. When the First Officer reported for duty he...
Read More