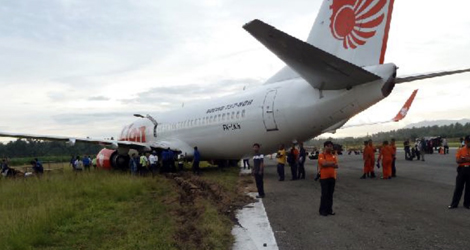 There were two pilots and five flight attendants with 110 passengers on board consisted of 104 adults, 1 child and 5 infants.

The flight from Makassar till commenced the approach to Gorontalo was uneventful and following with the weather was also clear.

At 1313 UTC, Lion Air flight LNI892 touched down at runway 27 and during landing roll the flight crew saw some animals ahead were crossing the runway.

Then when approximate 550 meters from the beginning of runway 27 and at aircraft speed approximate at 120 knots, the aircraft hit such animals.

Afterward, the pilots felt ineffective of brake respond and then the aircraft veered off to the left and trapped on the left side of the runway shoulder at about 2,100 meters from the beginning of runway 27.

The smell of burning meat entered the cabin during the landing roll and went out after the engines shut-down.

At 1314 UTC, the Djalaluddin Tower expressing a taxi clearance and it was not respond by the pilots.

At 1315 UTC, the pilot informed the Djalaluddin Tower that the aircraft was hit animals and stopped on the left runway shoulder and requested to check whether any fire on the aircraft and also requested assistance from the Airport Rescue and Fire Fighting (ARFF) to come at site

The Djalaluddin Tower confirmed that there was no fire observed.

The PIC of Lion Air flight LNI892 informed the situation to the passengers and requested to remain seated and wait for further instruction. Some passengers evacuated the aircraft through right over wing emergency window without any instruction from the flight crew.

Two passengers suffer sprained muscle around the ankle, as a consequence of evacuating the aircraft through the emergency window without any instruction from the crews.

After the ARFF arrived and confirmed to the pilot that there was no fire on the aircraft.

Afterward found there were two dead cows were found on the aircraft main landing gears.

Personnel Information data showed that, the entire of flight crew had valid license and medical certificate.

The aircraft was properly certified, equipped, and maintained in accordance with existing Indonesia regulations.

The weather on this serious incident was fine with the horizontal visibility at 8km.

All communications between Djalaluddin Tower and the flight crew were recorded by ground based automatic voice recording equipment and the Cockpit Voice Recorder (CVR) for the duration of the flight. The quality of the recorded transmissions was good.

The investigation concluded the contributing factors as follows: