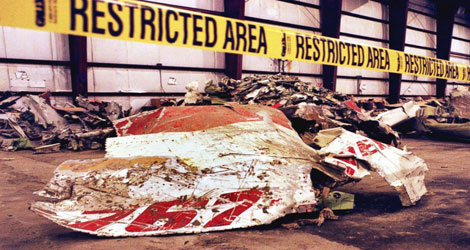 EGYPTAIR flight MS990 : at 0148:03, the command captain stated, “Excuse me, [nickname for relief first officer], while I take a quick trip to the toilet before it gets crowded. While they are eating, and I’ll be back to you.” While the command captain was speaking, the relief first officer responded, “Go ahead please” and the CVR recorded the sound of an electric seat motor as the captain maneuvered to leave his seat and the cockpit. At 0148:18.55, the CVR recorded a sound similar to the cockpit door operating.

At 0148:30, about 11 seconds after the captain left the cockpit, the CVR recorded an unintelligible comment. Ten seconds later (about 0148:40), the relief first officer stated quietly, “I rely on God.” There were no sounds or events recorded by the flight recorders that would indicate that an airplane anomaly or other unusual circumstance preceded the relief first officer’s statement “I rely on God”

At 0149:18, the CVR recorded the sound of an electric seat motor. FDR data indicated that, at 0149:45 (27 seconds later), the autopilot was disconnected. Aside from the very slight movement of both elevators (the left elevator moved from about a 0.7° to about a 0.5° nose-up deflection, and the right elevator moved from about a 0.35° nose-up to about a 0.3° nose-down deflection) and the airplane corresponding slight nose-down pitch change, which were recorded within the first second after autopilot disconnect, and a very slow (0.5° per second) left roll rate, the airplane remained essentially in level flight about FL 330 for about 8 seconds after the autopilot was disconnected.

At 0149:48, the relief first officer again stated quietly, “I rely on God.” At 0149:53, the throttle levers were moved from their cruise power setting to idle, and, at 0149:54, the FDR recorded an abrupt nose-down elevator movement and a very slight movement of the inboard ailerons.

Between 0149:57 and 0150:05, the relief first officer quietly repeated, “I rely on God” seven additional times. During this time, as a result of the nose-down elevator movement, the airplane load factor decreased from about 1 to about 0.2 G. Between 0150:04 and 0150:05 (about 10 to 11 seconds after the initial nose-down movement of the elevators), the FDR recorded additional, slightly larger inboard aileron movements, and the elevators started moving further in the nose-down direction. Immediately after the FDR recorded the increased nose-down elevator movement, the CVR recorded the sounds of the captain asking loudly (beginning at 0150:06), “What’s happening? What’s happening?” as he returned to the cockpit.

the captain of Egyptair flight MS990 again asked, “What’s happening, what’s happening?” and “What is this? Did you shut the engines ?”

The airplane’s load factor decreased further as a result of the increased nose-down elevator deflection, reaching negative G loads (about -0.2 G) between 0150:06 and 0150:07. During this time (and while the captain was still speaking [at 0150:07]), the relief first officer stated for the tenth time, “I rely on God.”

Additionally, the CVR transcript indicated that beginning at 0150:07, the CVR recorded the sound of numerous thumps and clinks which continued for about 15 seconds.
According to the CVR and FDR data, at 0150:08, as the airplane exceeded its maximum operating airspeed (0.86 Mach), a master warning alarm began to sound. (The warning continued until the FDR and CVR stopped recording at 0150:36.64 and 0150:38.47, respectively.) Also at 0150:08, the relief first officer stated quietly for the eleventh and final time “I rely on God” and the captain repeated his question “What’s happening?”
At 0150:15, the captain again asked, “What’s happening, [relief first officer’s first name] “What’s happening?” At this time, as the airplane was descending through about 27,300 feet msl, the FDR recorded both elevator surfaces beginning to move in the nose-up direction. Shortly thereafter, the airplane’s rate of descent began to decrease.

At 0150:21, about 6 seconds after the airplane’s rate of descent began to decrease, the left and right elevator surfaces began to move in opposite directions; the left surface continued to move in the nose-up direction, and the right surface reversed its motion and moved in the nose-down direction.

The FDR data indicated that the engine start lever switches for both engines moved from the run to the cutoff position between 0150:21 and 0150:23.

Information about the remainder of the flight came from the airplane’s two debris fields and recorded primary radar data from long-range radar sites at Riverhead, New York, and North Truro, Massachusetts, and the short-range radar site at Nantucket. The height estimates based on primary radar data from the joint use FAA/U.S. Air Force (USAF) radar sites indicated that the airplane’s descent stopped about 0150:38 and that the airplane subsequently climbed to about 25,000 feet msl and changed heading from 80º to 140º before it started a second descent, which continued until the airplane impacted the ocean.