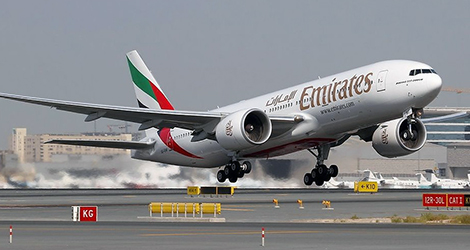 The flight crew composed of four members divided into two sets A and B. Each set was comprised of one commander and one copilot.

The Commander of Emirates flight EK231 stated that during cockpit preparation, she noticed that the altitude selector was set to 0000 feet and she selected it to 4,000 feet, which was also verified by the flight data recorder.

The selection of 4,000 feet on the altitude selector was in accordance with the planned standard instrument departure (SID) of SENPA2F.

The Commander stated that after lift-off, and during climb, she followed the flight director command. However, the rate of climb of Emirates flight EK231 reached to a maximum of approximately 800 feet per minute.

The flight crew were not able to adhere to published climb gradient of the SID due to the shallow climb.

At 23:11:01, the takeoff/go-around (TOGA) switch was selected and the flight mode annunciations (FMA) were changed to TOGA/TOGA. The flight directors indicated climb attitude on the Commander’s primary flight display (PFD).

A flap 15 over-speed occurred as the airspeed increased towards 250 knots. The flight crew continued to their destination and landed uneventfully.