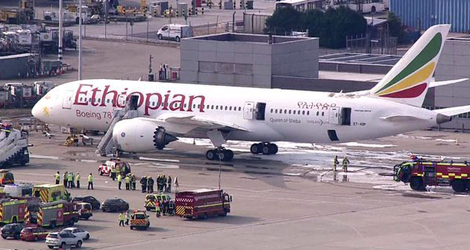 The fight crew did not report or record any.

After passenger and crew disembarkation, the aircraft was towed to Stand 592 to await its next service later that day. Before leaving the aircraft the engineer, on the fight deck, instructed the ground handling agent to remove ground electrical power.

The ground handling agent of Ethiopian Airlines flight ET710 accordingly turned off ground power at the stand’s control box but left the power umbilical cables attached. The engineer confirmed on the fight deck that ground power was . He then secured and left the aircraft, shortly after 0730 hrs.

The Rescue and Fire Fighting Service (RFFS) arrived on scene at 1535 hrs and discharged water and foam onto the outside of the aircraft. One fire fighter removed the power umbilical cables from the aircraft as a precaution.

Fire fighters equipped with breathing apparatus entered the aircraft at 1537 hrs via the L2 door and encountered thick smoke.

As they moved to the rear of the aircraft the smoke became denser so they opened further cabin doors to clear the smoke.

At the rear of the passenger cabin they observed indications of fire in a gap between two overhead luggage bins.

They were unable to use a hose-reel as the gap was too small and discharged a handheld ‘Halon’ extinguisher through the gap, about 20 minutes after entering the cabin.

This was ineffective, so they removed some ceiling panels to expose the area and to get better access. At this point a small amount of flame was visible.

This was extinguished with several pulses of water spray from their hose-reel, about 25 minutes after entering the cabin. A thermal-imaging camera was used to identify affected areas requiring further cooling.

The following causal factors were identified in the ground fire: