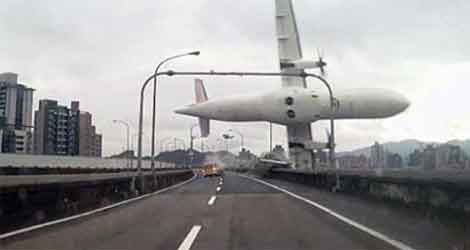 On February 4, 2015, TransAsia Airways flight GE235 , an ATR 72-600 aircraft, registration number B-22816, took off from Songshan Airport at 1053 Taipei time for Kinmen Airport. The aircraft carried 58 people, including 3 flight crew members, 2 cabin crew members, and 53 passengers. The aircraft lost contact immediately after took off and crashed into Keelung River, 43 people perished, 15 people on board and 2 people on ground received injuries.

At 1052:41, TransAsia Airways flight GE235 climbed through an altitude of 1,300 ft and the autopilot was manually disconnected. Three seconds later at 1052:44 the ATPCS sequence ended, ENG2 propeller was fully feathered. At 1052:43 PF said “i will pull back engine one throttle”, PM responded “wait a second cross check !”, but ENG1 power lever Angle (PLA5) was already retarded from 75 degrees to 66 degrees. PF and PM then announced heading mode, and continued the flight.
At 1052:51, the TransAsia Airways flight GE235 was climbing through 1,485 feet at 106 knots, and the heading was 131 degrees, the Automatic Flight Control System (AFCS) modes showed HDG SEL and IAS mode. At 1052:57 the selected heading was 092 degrees, the airplane then started turning to the left, and the speed was 106 knots.

At 1054:05, PM stated “we lost both sides”, two seconds later, PM realized and stated “both engines were flameout”.

An intermittent signal discontinuity between the auto weather unit (AFU) number 2 and the torque sensor may have caused the automatic take off power control system (ATPCS) :

The available evidence indicate the intermittent discontinuity between torque sensor and auto weather unit (AFU) number 2 was probably caused by the compromised soldering joints inside the AFU number 2.

The flight crew of TransAsia Airways flight GE235 did not reject the takeoff when the automatic take off power control system ARM pushbutton did not light during the initial stages of the takeoff roll.

Transasia Airways did not have a clear documented company policy with associated instructions, procedures, and notices to crew for ATR72-600 operations communicating the requirement to reject the takeoff is the automatic takeoff power control system did not arm.

Following the uncommanded auto feather of the engine number 2, the flight crew failed to perform the documented failure identification procedure before executing any actions. That resulted in pilot flying’s confusion regarding the identification and nature of the actual propulsion system malfunction and he reduced power on the operative engine number 1.

The flight crew’s non-compliance with TransAsia Airways ATR72-600 standard operating procedures – Abnormal and Emergency procedures for an engine flame out at takeoff resulted in the pilot flying reducing power on and then shutting down the wrong engine.

The loss of engine power during the initial climb inappropriate flight control inputs by the pilot flying generated a series of stall warnings including activation of the stick pusher. The crew of TransAsia Airways flight GE235 did not respond to the stall warnings in a timely and effective manner.

The loss of power from both engines was not detected and corrected by the crew in time to restart engine. The aircraft stalled during the attempted restart at an altitude from which the aircraft could not recover from loss of control

Flight crew coordination, communication and threat and error management (TEM) were less than effective, and compromised the safety of the flight . Both operating crew members failed to obtain relevant data from each other regarding the status of both engines at different points in the occurrence sequence. The pilot flying did not appropriately respond to or integrate input from the pilot monitoring.