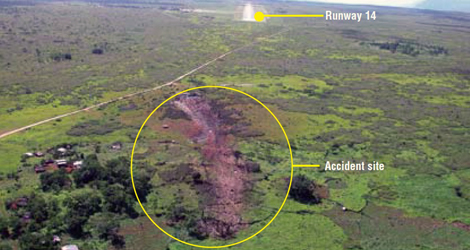 Before the flight crew commenced the descent into Baucau, the pilot in command briefed them that he would conduct a non-precision instrument approach at Baucau, with reference to the Baucau non-directional beacon (NDB).

The flight instruments fitted in the occurrence aircraft provided readings of height, speed and distance in metric units. The pilot in command’s briefing included information on the relevant heights for the missed approach procedure expressed in feet, and not in their metric equivalents. None of the other crewmembers commented on that fact.

The cockpit voice recorder (CVR) data revealed that the pilot in command did not refer to the source of data that he used for the briefing on the intended NDB approach at Baucau. The pilot in command’s arrival briefing also contained no information or discussion on:

The CVR data revealed that none of the other crewmembers commented on the omission of this critical information. As a result, the arrival briefing was not effective.

When the aircraft was about 300 km from Baucau, the pilot in command instructed the copilot to call Baucau ATS. Over the next 23 minutes, the copilot called Baucau Tower 25 times, but received no response to those calls. The flight navigator then called Baucau Tower. A controller, who was present at Baucau aerodrome at the time, but not on operational duty, advised the flight crew that ATS was not available and that landing would be at the discretion of the flight crew. The flight navigator acknowledged the controller’s advice, but did not seek information from the controller about the prevailing weather at the aerodrome.

None of the other crewmembers commented that the pilot in command had breached those relevant safety heights.

As the aircraft approached Baucau, the flight crew decided to conduct an overflight of the aerodrome before making a landing approach, and during the overflight, the flight crew realised that the runway was not where they expected it to be.

The investigation determined that the flight crew did not conduct the overflight of the aerodrome, or either of the landing approaches, with reference to the Baucau NDB.

The flight crew used selected data from their instrument approach charts for Baucau to formulate a userdefined non-precision approach using the onboard global positioning system (GPS). That user-defined procedure was a non-approved procedure.

The pilot in command discontinued the landing approach, and the flight navigator stated that he would apply a 4 km correction to position the aircraft for a second landing approach to where he thought the runway was located.
By applying the 4 km correction, the flight navigator was providing the pilot in command with inaccurate data, and resulted in the aircraft being repositioned towards a point about 1.65 km (0.88 NM) northwest of the actual position of the threshold of runway 14.

That incorrect data substantially increased the hazards of the userdefined approach procedure, and the risk of a CFIT event at that stage of the flight increased to a high degree.

As the aircraft turned on to the final approach heading during the second landing approach, the flight navigator stated that the aircraft was high on the approach profile, based on his assumption of the location of the threshold of runway 14. The pilot in command increased the rate of descent of the aircraft to about 18 m/sec (3,543 fpm), and stated ‘Increased’.

None of the other crewmembers commented on the high rate of descent, or drew the pilot in command’s attention to the fact that the approach was unstabilised at that point.

At about the same time, the aircraft descended through 162 m, which was the published MDH for a straight-in landing on the runway 14 NDB approach. Neither the pilot in command nor the copilot appeared to notice that the aircraft had descended through the MDH, and it is probable that both were distracted by the flight engineer’s erroneous action.

The high rate of descent continued unchecked until slightly less than 2 seconds before impact. It is probable that the pilot in command and the copilot were each unaware of the high rate of descent, because neither was monitoring the flight instruments while they were looking ahead of the aircraft and trying to establish visual contact with the ground.

The aircraft’s impact with terrain was a direct consequence of the pilot in command descending the aircraft below the published minimum descent height for the runway 14 non-precision instrument approach procedure in an unstabilised manner.

Furthermore, it was also as a result of poor planning by the flight crew and less than effective crew coordination.