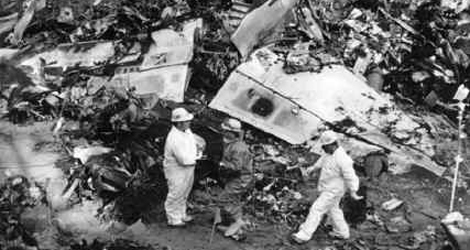 On March 3, 1991, United Airlines flight UA585 was on a scheduled passenger flight from Denver, Colorado, to Colorado Springs, Colorado.

Visual meteorological conditions prevailed at the time, and the flight was on an instrument flight rules flight plan.

Numerous witnesses reported that shortly after completing its turn onto the final approach course to runway 35 at Colorado Springs Municipal Airport, about 0944 mountain standard time, United Airlines flight UA585 rolled steadily to the right and pitched nose down until it reached a nearly vertical attitude before hitting the ground in an area known as Widefield Park.

United Airlines flight UA585 was destroyed, and the 2 flight crew members, 3 flight attendants, and 20 passengers aboard were fatally injured.

The National Transportation Safety Board determines that the probable cause of the United Airlines flight UA585 accident was a loss of control of the airplane resulting from the movement of the rudder surface to its blowdown limit.

The rudder surface of United Airlines flight UA585 most likely deflected in a direction opposite to that commanded by the pilots as a result of a jam of the main rudder power control unit servo valve secondary slide to the servo valve housing offset from its neutral position and overtravel of the primary slide.