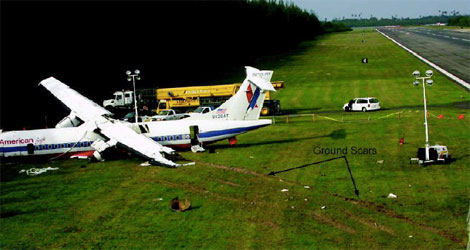 The airplane came to a complete stop on a grassy area about 217 feet left of the runway 8 centerline and about 4,317 feet beyond the runway threshold. The captain was seriously injured; the first officer, 2 flight attendants, and 16 of the 22 passengers received minor injuries; and the remaining 6 passengers received no injuries.

The airplane was substantially damaged. The airplane was operating under the provisions of 14 Code of Federal Regulations Part 121 as a scheduled passenger flight. Visual meteorological conditions prevailed for the flight, which operated on an instrument flight rules flight plan.

Executive Airlines flight MQ5401 captain’s overcontrol of the elevator during the landing and his failure to execute a go-around from a destabilized flare were causal to the accident.

The National Transportation Safety Board determines that the probable cause of this accident was the captain’s failure to execute proper techniques to recover from the bounced landings and his subsequent failure to execute a go-around.
The safety issues in this report include flight crew performance, the lack of company bounced landing recovery guidance and training, and malfunctioning flight data recorder potentiometer sensors. Safety recommendations concerning bounced landing recovery guidance and training and flight control surface position sensors are addressed to the Federal Aviation Administration.