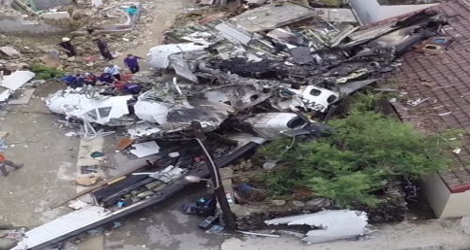 At 1906 Taipei Local Time, Transasia Airways flight GE222 impacted terrain approximately 850 meters northeast of the threshold of runway 20 at Magong Airport and then collided with a residential area on the outskirts of Xixi village approximately 200 meters to the southeast of the initial impact zone.

At the time of the occurrence, the crew was conducting a very high frequency omni-directional radio range (VOR) non-precision approach to runway 20. Transasia Airways flight GE222 was destroyed by impact forces and a post-impact fire.

The occurrence was the result of controlled flight into terrain, that is, an airworthy aircraft under the control of the flight crew was flown unintentionally into terrain with limited awareness by the crew of the aircraft’s proximity to terrain.

The crew continued the approach below the minimum descent altitude (MDA) when they were not visual with the runway environment contrary to standard operating procedures.

The investigation report identified a range of contributing and other safety factors relating to the flight crew of the aircraft, TransAsia’s flight operations and safety management processes, the communication of weather information to the flight crew, coordination issues at civil/military joint-use airport, and the regulatory oversight of TransAsia by the Civil Aeronautics Administration (CAA).

The Aviation Safety Council (ASC) has issued a series of safety recommendations to TransAsia Airways, CAA, and the military to correct the safety deficiencies identified during the investigation.

There are a total of 46 findings from the Final Report, and 29 safety recommendations issued to the related organizations.