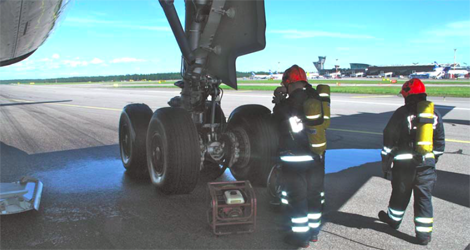 Finnair flight AY58 incident occurred from from Shanghai, China to Helsinki– Vantaa Airport, Finland on 22 June 2009.
The aircraft was an Airbus A340-313, registration OHLQE.
There were 195 passengers and 12 crew members on board.
The inner rear tyre on the left landing gear separated and the tread rubber shredded during takeoff at 02:17 (all times are in UTC). Rubber debris damaged hydraulic lines on the aircraft’s landing gear and brake systems.
The flight proceeded to Helsinki-Vantaa, landing at 11:53 without any further damage.
No persons were injured in this incident. The incident was classified as a serious incident.
The takeoff was otherwise normal except for the fact that the Electronic Centralized Aircraft Monitor (ECAM) generated the amber caution BRAKES HOT. Approximately six minutes after takeoff the ECAM generated a caution related to a leak in one of the hydraulic systems (green).
The crew acted according to the instructions displayed by the monitoring system. Four hours from takeoff the ECAM enunciated that the hydraulic fluid in the green hydraulic system had been depleted to the minimum level.
After the aircraft departed Shanghai, pieces of tyre with the marking Finnair were found on the runway.

The pieces were delivered to the Lufthansa mechanic who performed the turnaround check on the aircraft.

He then reported the matter to Finnair in Helsinki, photographed the pieces and e-mailed the photos to Helsinki.

The photos indicated that the pieces came from OH-LQE’s tyre number six, on the rear inner wheel of the left main landing gear. Preliminary information regarding a tyre failure was reported to the flight crew approximately three hours before landing.
This was supplemented by precise information regarding the tyre in question 21 minutes prior to landing.
During the flight the crew assessed the problems caused by the hydraulic fault as well as the required corrective action.

It became evident that, among other things, they had to extend the landing gear via gravity extension, which meant that the centreline gear would not extend and no nosewheel steering would be available.
Later, the information of a tyre failure added to the uncertainty regarding the extent of the damage and the condition of the landing gear.
Therefore, 40 minutes before landing, the captain decided that the cabin had to be prepared for a possible emergency during landing. The air traffic control at Helsinki-Vantaa arranged a priority approach and landing for the OH-LQE on runway 22L.
The emergency response service was also alerted.
The landing was successful but, during braking, the other hydraulic system (blue) began to leak through a fractured brake line coupling.
After the aircraft had become stationary the blue system drained completely.
Since nosewheel steering and brakes were inoperative the aircraft had to stop and stay on the runway. After approximately 20 minutes the aircraft was towed to the apron, where the passengers deplaned.
Investigation revealed that tyre number 6 delaminated at takeoff and the tread shredded into pieces. Chunks of loose rubber flying off at high velocity damaged hydraulic lines on the green hydraulic system as well as the brake line coupling on wheel number 2.  Wheel number 2 is in front of the damaged wheel number 6.
The green system depleted to its minimum level through a rupture on the gear-up line. After the aircraft had come to a standstill, the blue system drained through the damaged brake line coupling.

During the final stages of takeoff of Finnair flight AY58 the tread of tyre number 6, the rear tyre on the left main landing gear, separated and pieces of rubber impacted with aircraft structures at high velocity.

The damaged tyre had previously been on another aircraft. It had been removed and sent for retreading because a hole was discovered in it. The pinhole was not reported to the retreading company, nor was it detected during the process.

After retreading, the tyre was put on the OH-LQE.

Thereafter, through the pinhole a gradual build-up of pressure between the tyre tread and the casing caused tread separation that resulted in complete delamination at takeoff in Shanghai.
Rubber discoloration caused by overheating was detected during the inspection. It is possible that overheating degraded the integrity of the tread and the belt plies, accelerating delamination. The leaks on the green and blue hydraulic systems were caused by the tyre shreds’ impact energy when they hit the hydraulic lines in the wheel well as well as the brake line coupling on wheel number 2.