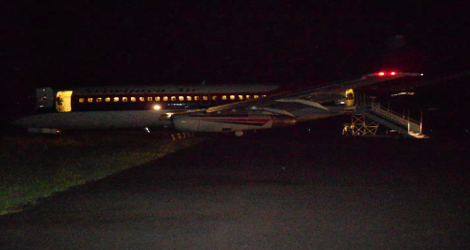 There were 134 persons on board consisted; two pilots, four cabin crews and 128 passengers 114 adult, 4 child and 7 infant.

On 2000 feet after take-off from Pekanbaru, pilot observed that the hydraulic quantity System A was decreasing. The flap indicator pointed between UP and 1 degree and it was observed also that the Trailing Edge Flap Light indicator on AFT Overhead Panel shows green that mean the entire trailing edge flap was still not up position.

On 5000 feet, pilot observed that the hydraulic System A totally loss.

On FL250, pilot observed that the hydraulic quantity of System B also decreasing followed by autopilot disengage and pilot decided to divert to Sultan Machmud Badarudin II (WIPP) of Palembang.

At 12:28 UTC pilot informed to APP Palembang that the aircraft had the hydraulic problem and PIC decided divert to Palembang airport. The Palembang ATC instructed the pilot to descent from FL250 to 2500 feet for VOR/ DME approach.

At 12.50 UTC the aircraft landing, the beginning of aircraft touch down the crew felt that there was a deceleration as result of the brake application; afterward at approximately 60kts they did not feel any deceleration even though the reverser application was increased.

Asymmetry reverser was applied by the pilot to keep align with the runway centre line. The aircraft main wheels stopped in approximately 20 meters way of end runway 11
The evacuation performed as procedures and the crew and passenger no injured.

The passenger picked up by airport bus to arrival hall.