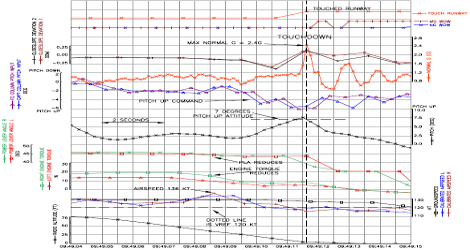 The FLYBE flight BE461 crew and aircraft were operating the first sector of a return fight from Newcastle to London Gatwick.

They were aware of forecast strong and gusty wind conditions throughout the south of England. The commander was the PF and, once the PNF received the weather, he briefed for an ILS approach to Gatwick Runway 08R using Flap 15 in accordance with the company standard operating procedures.

The ATIS for Gatwick reported the wind as 170°/17 kt with the direction varying between 140° and 210°. This was less windy than the crew were expecting and there were no reports of gusts. The First Officer (F/O) also received the VOLMET for the en-route and alternate airfields, almost all of which were reporting significant gusts of 25 kt or greater.

The FLYBE flight BE461, which was being flown with the autopilot engaged, captured the localiser and glidepath having been radar vectored onto the ILS centreline. The crew noted at this stage on the approach that they had about a 40 kt tailwind.

There were significant variations in airspeed throughout the approach as the conditions became increasingly turbulent. The commander elected not to utilise reduced propeller RPM (NP ) for landing and selected max governing RPM (fine pitch) to allow a more rapid speed response to power lever movement. At about 700 ft agl the autopilot disconnected due to the turbulence. The commander immediately stabilised the aircraft and continued the approach manually with a target VREF of 120 kt.

At 500 ft the aircraft was cleared to land with the surface wind reported as 190°/12 kt gusting to 24 kt. During the final few hundred feet the speed varied between 115 and 135 kt with the torque varying between 0 and 20%. An average Flap 15 approach torque setting would be approximately 17%.

At 300 ft agl the commander of FLYBE flight BE461 was fully visual with the runway and asked the PNF to put the fight directors to standby. The aircraft descended slightly below the glideslope, with a visual indication of three red and one white light on the precision approach path indicators (PAPIs), and the commander added power to recover the aircraft onto the glidepath.

At about 40 ft agl the recorded data showed an indicated airspeed increase to 137 kt. The commander responded by reducing torque to 8%. FLYBE flight BE461 speed decreased to VREF and stabilised with the rate of descent initially remaining constant at about the normal rate of 600 fpm.

The aural radio altimeter counted down from 50 ft, in 10 ft increments, at a rate which sounded normal to the crew. At 25 ft agl, the commander became aware of an increasing sink rate and initiated a flare which increased the aircraft pitch from about 2.5° to 7.5° over three seconds. The FDR shows that the aircraft now had a significant tailwind with a groundspeed 10 kt greater than its airspeed.

The aircraft touched down heavily on both main gear and the aft fuselage with a vertical g acceleration of 2,4.

The FLYBE flight BE461 crew were aware that the TOUCHEDRUNWAY caption illuminated following the landing. As the commander vacated the runway he called for the emergency check list for the touched runway caption. The F/O read this drill which, on the ground, only advises the need to contact engineering before the next fight. Therefore the aircraft was taxied to its parking stand before being shut down. The passengers disembarked normally.

The approach was flown in difficult conditions. Flap 15 provides little pitch manoeuvre margin during the flare and the ‘pitch six’ call may be too late to prevent damage from occurring. The critical aspect of this approach was the rate of descent, which although normal for the approach, was not arrested by the landing flare. The reduction of the power levers to eight percent torque at 40 ft, just before the flare, resulted in a rapid reduction in lift across the wing. This reduction in lift could not be countered by the increased fare and led to the aircraft landing heavily on the runway.