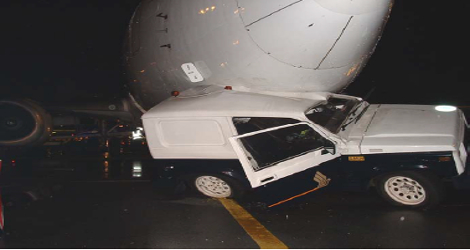 On 12 December 2002, Garuda Airlines flight GA833, a Boeing 737- 300 aircraft bearing registration mark PK-GGG, was on a scheduled passenger flight from Singapore to Jakarta. It was a “turn-around” flight – it had arrived from Jakarta earlier. The aircraft was parked at Passenger Gate D30 of Changi Airport Terminal 1.

At about 20:35 hours, the co-pilot obtained ATC route clearance for Jakarta. The pushback commenced at 20:39 hours. The crew was given instruction by ATC to “taxi on the greens (and) hold short NC3”.

The taxi route was Taxiway N3, Taxiway NC3, Taxiway A7 and then to Runway 02R. The Garuda Airlines flight GA833 began taxiing out at 20:43 hours for Runway 02R. See chart at Appendix 1 for the taxiway layout around the Central Apron.

The crew observed that there was slight rain and put on the windshield wipers at low speed. In accordance with the company operations procedures, the crew put on the taxi light, runway turn-off lights, anti-collision lights, position lights, wing lights and logo lights before commencing the taxi.

The pilot-in-command (PIC) did the taxiing. Shortly after the Garuda Airlines flight GA833 had started to move under its own power, the PIC tested the brakes and called for the taxi-out checklist. The taxi-out checklist was completed when the aircraft was near Gates D35 or D36. The PIC said that he was taxiing the aircraft at about 12 knots using idle engine speed.

At 20:46 hours, shortly before arriving at Taxiway NC3, ATC instructed GA 833 to continue to follow the green taxiway centre line lights to the holding point of Runway 02R. As instructed, the crew continued the taxi onto Taxiway NC3. 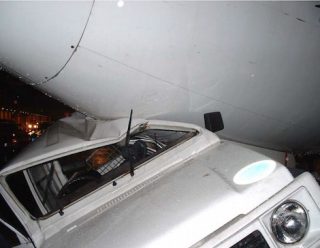 The crew said that when the aircraft turned into Taxiway NC3, they could see the green taxiway centre line lights illuminated all the way to Taxiway A7. According to the crew, the visibility and the existing illumination from the tarmac and apron lightings were adequate for taxiing although it was raining slightly.

Both crew members said that they did not see any ground traffic movement around the taxi and tarmac areas before entering Taxiway NC3. Then, according to the co-pilot, during the taxi manoeuvre on Taxiway NC3, he happened to look out of the side window on the right and saw a vehicle moving faster than the aircraft on the roadway on the right.

The vehicle made a left turn to the incident junction of Roadway R5S/ Taxiway NC3 and headed towards the aircraft. He shouted to the PIC to stop the aircraft.

On hearing the co-pilot’s shout, the PIC applied brakes to stop the aircraft. At the same instant the PIC felt the aircraft was hit on the right side. The PIC noted the time to be about 20:48 hours. He then set the parking brakes and told the co-pilot to inform ATC that they had been hit by a vehicle.

The collision was the result of the failure of the driver of the vehicle to maintain an adequate look-out for aircraft movement on Taxiway NC3.

On 13 October 2010, a Boeing 717-200 (717) aircraft, registered VH-NXD (NXD), was being operated by Cobham Aviation Services Australia on a scheduled passenger flight from Perth to Kalgoorlie, Western Australia. Cobham Aviation B717 VH-NXD was due to depart at 1150...
Read More