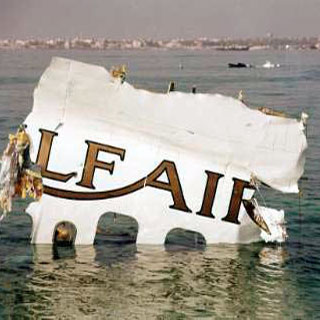 GF-072 was cleared for a VOR/DME approach for Runway 12 at Bahrain. At about one nautical mile from the touch down and at an altitude of about 600 feet, the flight crew requested for a left hand orbit, which was approved by the air traffic control (ATC). Having flown the orbit beyond the extended centreline on a south-westerly heading, the captain decided to go-around. Observing the manoeuvre, the ATC offered the radar vectors, which the flight crew accepted.

GF-072 initiated a go-around, applied take-off/go-around thrust, and crossed the runway on a north-easterly heading with a shallow climb to about 1000 feet. As the aircraft rapidly accelerated, the master warning sounded for flap over-speed.

A perceptual study, carried out as part of the investigation, indicated that during the go-around the flight crew probably experienced a form of spatial disorientation, which could have caused the captain to falsely perceive that the aircraft was ‘pitching up’.

He responded by making a ‘nose-down’ input, and, as a result, the aircraft commenced to descend.

The GPWS warning of GULF AIR flight GF072 was repeated every second for nine seconds, until the aircraft impacted the shallow sea.

The aircraft was destroyed by impact forces, and all 143 persons on board were killed.

The factors contributing to the above accident were identified as a combination of individual and systemic issues.

The individual factors during the approach and final phases of the flight were:

The systemic factors that could have led to these individual factors were:

Any one of these systemic factors, by itself, was insufficient to cause a breakdown of the safety system. Such factors may often remain undetected within a system for a considerable period of time. When these latent conditions combine with local events and environmental circumstances, such as individual factors contributed by “front-line” operators or environmental factors, a system failure, such as an accident, may occur.

The investigation showed that no single factor was responsible for the accident to GF-072.

The accident was the result of a fatal combination of many contributory factors, both at the individual and systemic levels. All of these factors must be addressed to prevent such an accident happening again.

The airline has taken a number of post-accident safety initiatives to address some of these individual and systemic factors. The airline has reported that it is in the process of enhancing its flight crew training.