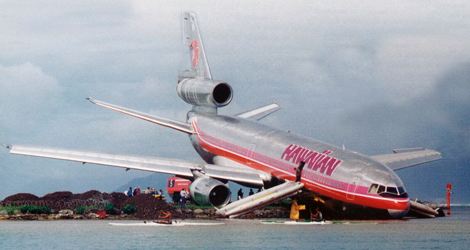 On Sunday 24 December 2000 at 4 h 38 min, the DC10 registered N132AA took off from Honolulu bound for Tahiti with a hundred and thirty-nine passengers and fifteen crew members on board.

This was Hawaiian Airlines scheduled international flight HAL 481.
The flight crew consisted of a Captain, a co-pilot and a flight engineer.
No notable events occurred on the flight until the approach.

He then asked the co-pilot to find out about the weather. The controller transmitted the 9 h 00 information, mentioning a 080°/5 kt wind, occasionally 340°/15 kt, with gusts to 25 kt.
He also mentioned rain showers, some cumulonimbus and indicated that the runway was wet.
During the descent, numerous thunderstorm cells were observed by the crew on the track and around the aerodrome.

At 9 h 46 min 30 s, the tower controller asked them to descend towards 2,500 ft QNH and to report back when passing OVINI. He stated that there were showers at the aerodrome. Twenty-two seconds later, the co-pilot announced that they were passing OVINI.

At 9 h 49 min 04 s, the Captain armed the spoilers.
At 9 h 49 min 09 s, he asked for the flaps to be extended to 22° then, twenty-five seconds later, to the 35° position.
At 9 h 49 min 46 s, the controller cleared flight HAL 481 to land on runway 04. He gave the wind as 060°/10 kt, gusting to 14. The Captain noticed changes in the wind and the co-pilot announced, based on the airplane’s GFMS, a wind from 280° at 28 kt.
At 9 h 51 min 24 s, the controller transmitted new meteorological information: 330°/18 kt, gusting to 28. Thirty-two seconds later, the crew had the airfield in sight and a final wind reading was given to them: 330°/18 kt, gusting to 29.
At 9 h 52 min 11 s, the autopilot was disconnected. Nine seconds later, the airplane passed under the approach path and the GPWS “sink rate” warning sounded. The pilot rejoined the descent path with the aid of the PAPI and continued his approach using external visual references.
At that time, the airplane was following a track parallel and to the right of the approach path.

Between 9 h 52 min 32 s and 9 h 52 min 38 s, the radio altimeter call-outs between fifty and ten feet began and continued at a rate of one per second. Power reduction began five seconds after the ten feet call-out.
At 9 h 52 min 45 s, the wheels of the main landing gear touched the runway, to the right of the centerline. Five seconds later, which was two seconds after the nose gear touched down, the thrust reversers were deployed.

The parameters indicate that reverse thrust on each of the engines was adjusted and regulated without it ever reaching its maximum value.
At 9 h 52 min 53 s, eight seconds after the main landing gear touched down, the spoilers were deployed manually by the flight engineer.
At 9 h 52 min 59 s, the copilot’s “Centerline” call-out suggested the Captain rejoin the runway centerline, from which the airplane was moving away to the left.
At 9 h 53 min 21 s, the airplane crushed the localizer antennae, continued along the runway extended centerline and then came to a stop past the end of the runway, its nose in the lagoon.

The Captain, after checking on the safety situation around the airplane, ordered the evacuation via door 2R.

The accident was caused by the failure, during the preparation for the approach, to take into account the risk of a storm passing over the airfield at the time of landing.