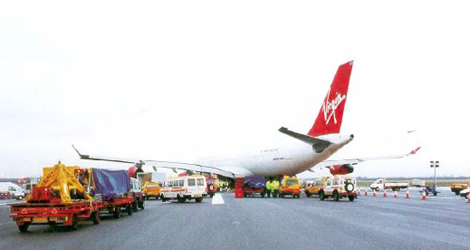 Virgin Atlantic flight VS024 was a Los Angeles LAX to London Heathrow LHR on 05 November 1997, operated with a A340-311 Airbus registration G-VSKY.
The accident occurred when the aircraft, which had a landing gear problem on its first approach to Heathrow Airport, carried out an emergency landing on Runway 27L with the left main landing gear only partially extended.

The flight crew of Virgin Atlantic flight VS024 responded to the in-flight emergency with commendable judgement and conducted a skilful landing, with the Airport Emergency Services in full and effective attendance. The evacuation was completed with minor injuries to 5 passengers and 2 crew members.

The post-evacuation handling of the passengers and crew was efficient and effective. Only minor evacuation injuries were sustained by the evacuees of Virgin Atlantic flight VS024.

Examination of the left main landing gear of Virgin Atlantic flight VS024 found that the gear had been jammed by the No 6 wheel brake torque rod which had disconnected from its brake pack assembly and had become trapped in the keel beam structure. The associated torque rod pin was subsequently found beyond the end of Runway 24L at Los Angeles International Airport, the departure airport.