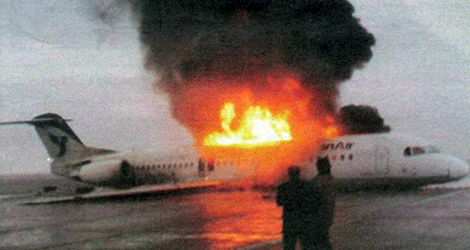 Iran Air flight IRA235 : on 02 Jan 2008, at 07:32 local time ,The Aircraft F.100, registered EP-IDB, operated by Iran Air flight No;IRA235 took off from runway 29L of Mehrabad Airport (OIII) /Teheran destination to Shiraz (OISS) city in the Islamic Republic of Iran . It was a regularly scheduled passenger transport flight. The aircraft started to roll to left wing down shortly after lift off. The left wingtip touched the ground.

All gears broke off and the aircraft sled on the area next to the runway. Reportedly, during the impact or shortly thereafter all electrical powers were lost.
When the aircraft came to rest, the fire developed starting from the left wing root towards the fuselage. All passengers and crew were evacuated through the two right over wing emergency exits.

This is what happened :

It is believed that the accident was caused by the crew fault that has not decided to de-ice aircraft, which led to wing contamination and finally aircraft has stalled during take off.