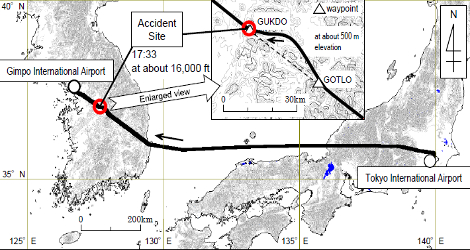 The history of the Japan Airlines flight JAL93 is summarized below, based on the statements of the Pilot-In-Command (PIC), First Officer (FO), Cabin Attendants (CAs) and interpreters, and records of the flight recorder and Air Traffic Control (ATC) communication.

The PIC, having received information before the departure that a cumulonimbus (CB) area existed over the west sea of the Korean peninsula, instructed cabin crew members to finish cleanup, and to be seated 30 minutes prior to landing.

During its flight, however, he obtained information from the operation support staff of the company at Gimpo International Airport that no CB to be avoided was observed on its approach course.

In response to this, he informed cabin crew members that he would turn on the seat belt sign as usual at an altitude of 10,000 ft, around 15 minutes prior to landing.

Japan Airlines flight JAL93 below 30,000 ft was in thin clouds. The flight crewmembers set the gain and antenna tilt angle of the airborne weather radar to auto positions and also set the range in 40 nm observing within the range equivalent around 5 minutes in time.

To avoid a weak echo area, they turned the aircraft to the right (east) with ATC permission.

After clearing the echo area, they were instructed by ATC to proceed direct to GUKDO.

Although no weather echo was observed around GUKDO, at 17:33, a clear visible cloud came into sight nearby with no sufficient time to avoid, and Japan Airlines flight JAL93 entered it.

At that moment, shaking of large amplitude considered nearly TB4 * continued for around three seconds. The PIC was informed that no passengers sustained injuries, while several cabin crewmembers and interpreters did.

A vertical acceleration of approximately +1.5 G continued for around two seconds, and momentarily it changed to -0.2 G, then +1.3 G (+: moving upward) when Japan Airlines flight JAL93 encountered strong shaking.

There was a little change of pitch angle. The autopilot and autothrottle remained engaged during the shaking.

Before the large shaking, CAs had completed services and were preparing for landing.

Since shaking of the aircraft gained its momentum from around 17:28, CAs and interpreters in the aft galley took their seats temporarily although the seatbelt sign was not lit on.

When they resumed their work after the shaking subsided, they suddenly encountered a violent vertical shaking, by which cabin crewmembers were thrown into the air to hit the ceiling and one of them fell onto the floor on her back. As a result, she was seriously injured.

The atmosphere being stabilized after clearing clouds, the PIC turned on the seatbelt sign at 10,000 ft as usual and continued descent. The aircraft landed at Gimpo International Airport at 17:51.

In this accident, it is highly probable that the aircraft was strongly shaken because it encountered turbulence when flying at around 16,000 ft, causing cabin crewmembers thrown into the air to hit the ceiling, and one of them fell onto the floor on her back to sustain a severe injury.

It is highly probable that the turbulenceJapan Airlines flight JAL93 encountered was caused by the redeveloped convective clouds after once shrinking.

It is probable that the pilots were unable to capture the echoes of the convective clouds in their early developing stages which existed in its flight direction (forward and downward of the aircraft) due to having set the antenna tilt angle of the airborne weather radar to auto mode.