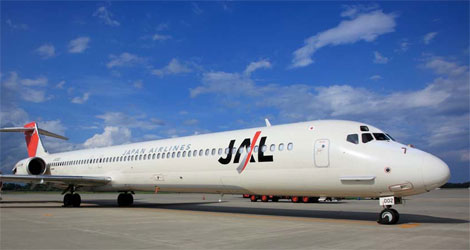 Japan Airlines flight JAL3538 took off on Sunday August 15, 2010, at 16:08 Japan Standard Time (JST: UTC+9hr, unless otherwise stated all times are indicated in JST on a 24-hour clock).
Japan Airlines JAL3538 was a McDonnell Douglas MD-90-30, registered JA002D, operated by Japan Airlines International Co., Ltd. took off from Sendai Airport for Fukuoka Airport as a scheduled flight 3538. Around 16:10, while climbing, it declared a state of emergency upon the activation of the right engine fire warning alarm at about 5,500 ft. The right engine was shut down while the fire-extinguishing system was activated; consequently, the aircraft returned to Sendai Airport and it landed at 16:23. Heat damage inside the cowling of the right engine was confirmed after landing. There were 111 people on board, consisting of the Pilot in Command (PIC), 4 other crewmembers, and 106 passengers, but no one was injured.

Sendai Departure called the Aircraft to inform of the white smoke from the right engine observed during takeoff.

It is probable that this serious incident occurred as follows: The Aircraft No. 4 Bearing Scavenge Tube of the right engine fractured during takeoff, resulted in the Tube breaking loose from the Diffuser Case letting the engine oil blow out through an opening where it broke loose, and subsequently the oil contact with the engine high temperature section developed into an engine fire. It is highly probable that the repeated stress associated with engine operations generated the crack origins in the No.4 Scavenge Tube and the fatigue crack grew into the fracture of the tube.