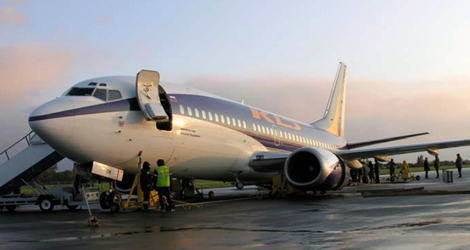 On the 1st October, 2008 in night time, during landing at aerodrome Kaliningrad (Khrabrovo) , JSC KD Avia flight KNI794 was involved in an accident: The flight was operated with a Boeing B-737-300 registered EI-DON operated by JSC KD AVIA airline of North-Western Air Transport (AT) ITA of Russian CAA.

As a result the aircraft got damage to the fuselage and engines.

None of the crew or passengers was injured.

A commission for the investigation of the accident was appointed by Order No. 35/454-P, issued on October 02, 2008 by the Vice-Chairman of the Interstate Aviation Committee (IAC).

The NTSB and the AAIU assigned their Accredited Representatives to participate in the investigation.

Experts from JSC KD Avia flight KNI794 ( Transaero airline ), as well as the Boeing Company were involved in the investigation.

The Prosecutor General’s office of the North-Western Region has not conducted a preliminary investigation of the accident.

The cause of the JSC KD Avia flight KNI794 accident was a belly landing, which lead to aircraft structure’s and engine’s damage and was a result of the following negative factors:

erroneous cutout by the JSC KD Avia flight KNI794 ‘s co-pilot of the Landing Gear Warning Horn of the GPWS system, which was a result of the incorrect fulfillment of QRH recommendations regarding flap warning cutout in case of flap asymmetry.