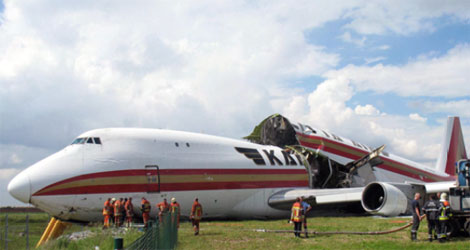 The aircraft came to a stop 300m after the end of runway 20, above the railroad embankment.

The aircraft was severely damaged; it broke in 3 parts. The crew of 4, and a passenger have safely evacuated, and suffered only minor injuries.

The cargo aircraft came from JFK International airport, New York and after a technical stop in Brussels, would continue to Bahrain.

The initial phase of the take-off run occurred normally. The speed increased under a constant acceleration until one of the engine experienced a bird strike. This caused a momentary loss of power, accompanied by a loud bang, heard by the crew and external witnesses, and by flames, seen from the control tower.

Engine Nr 3 experienced a bird strike, causing it to stall. This phenomenon was accompanied by a loud bang, noticed by the crew of Kalitta Air flight K4706.

The bang and the loss of power occurred 4 seconds after the V1 speed call-up.

Two seconds after the bang, all four engines were brought back to idle, and braking action was initiated.

The aircraft reached a first embankment, dropping from a height of 4 m, and broke in three parts. The aircraft came to a stop just above the top of the railroad embankment.

The accident was caused by the decision to Reject the Take-Off 12 knots after passing V1 speed.

The following factors contributed to the accident;