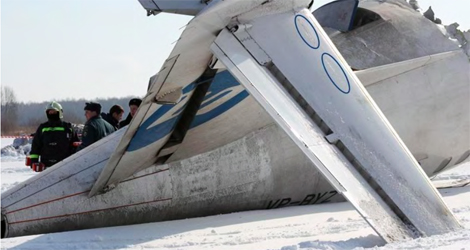 The АТR72-201 VP-BYZ aircraft, operated by JSC “UTAir Aviation” (further referred to as “UTAir”) crashed while performing the scheduled passenger flight UTA120 from Tyumen to Surgut.
According to the load sheet the A/C TOW and center of gravity were 18730 kg and 30.72 % MAC correspondingly and that was within the aircraft operation limits.
Onboard there were 4 crew members (PIC, F/O and two flight attendants) and 39 passengers, all RF citizens.

After the landing gear and the flaps retraction the aircraft started descending with a significant left bank and then collided with terrain.

The ground collision first led to the structural damage of left wing followed by the fuel spillage and fire, and further to the complete destruction of aircraft with the right wing, cockpit and rear section with empennage separation.

Out of the 43 persons onboard, 4 crew members and 29 passengers were killed.

The immediate cause of the АТR 72-201 VP-BYZ aircraft accident was the PIC’s decision to takeoff without de/anti-icing treatment despite the fact that snow and ice deposits were present on aircraft surface and were discovered by the crew members during taxi which resulted in degradation of aircraft aerodynamic performance and stall during climbing after takeoff as well as inability of the crew to recognize stall and, consequently, failure to undertake recovery procedure.

The aircraft stall occurred at the operational angles of attack right after flaps retraction with engaged autopilot before stall warning system activation and was caused by the loss of the wing lift effectiveness due to takeoff with non-removed ground icing.

The system cause of the accident were shortcomings in ground handling activities and staff training in UTAir-Technik that became possible because of absence of due monitoring by the Technical and Operation Supervising Directorates of UTAir airline for compliance with airline requirements regarding ground handling and aircraft ground icing protection which resulted in erroneous evaluation of aircraft conditions by the PIC and aircraft mechanic (the shift head kept himself aloof from monitoring mechanic’s activities) after the aircraft has been on ground in icing conditions for a long time and in release the aircraft to fly without de/anti-icing treatment.

The departure of the aircraft with non-removed ground icing became possible due to system shortcomings in the aircraft ground icing protection organization in the Russian Federation, that at the time of the accident was revealed in the absence of the valid basic document, that would determine the regulatory requirements as to aircraft ground de/anti-icing, including the requirements for organizations licensing and training of the personnel that is responsible for the works in question.

The contributing factors were: