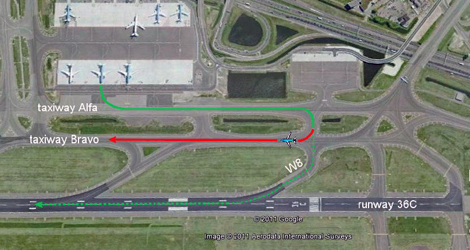 KLM flight KL1369 was flown by a pilot in command and a first officer. Prior to take-off, the aircraft had been de-iced on an apron designed for de-icing purposes. The pilot in command and first officer then received the instruction to taxi to the runway for departure via taxiway Alfa against prescribed direction of travel. KLM flight KL1369 had been scheduled to take off from runway 36C. Two taxiways are located adjacent to the take-off runway: Alfa and Bravo, with taxiway Alfa located furthest to the east.

The aircraft initially was on its way to the beginning of the runway. During taxiing, air traffic control suggested the crew – if prepared – took a shorter route to the take-off runway via entry W8. The flight deck crew accepted the shorter route.

Upon approaching taxiway Bravo, which the aircraft still had to cross, however, the crew made an error.

Crew of KLM flight KL1369 assumed that the taxiway was the runway, turned the aircraft onto the taxiway and then took off.

Initially, air traffic control failed to realise what had happened. When the runway controller realised what had happened, he decided not to abort the take-off as the aircraft had gained too much speed and there was no risk of collision. Although no one sustained injury during the serious incident and there was no damage to the aircraft, a highly dangerous situation had arisen.

The serious incident occurred due to the flight deck crew’s lack of awareness of the aircraft‘s position in the manoeuvring area of the airport.

The following factors played a role in the above:

Air traffic control failed to prevent the serious incident from occurring for the following reasons: