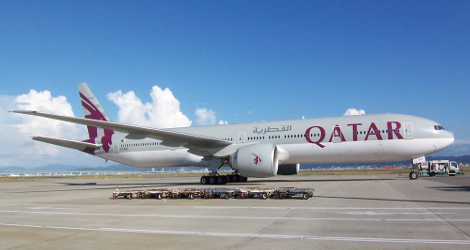 The occurrence covered by this report falls under the category of “Attempted landing on a closed runway” as stipulated in Clause 2, Article 166-4 of the Civil Aeronautics Regulations of Japan, and is classified as a serious incident.

On August 30 (Monday), 2010, a Boeing 777-300, registered A7BAE, operated by Qatar Airways, took off from Narita International Airport at 20:59 Japan Standard Time (JST: UTC+ 9hr, unless otherwise stated all times are indicated in JST using a 24-hour clock). At about 21:55, when the QATAR AIRWAYS flight QR803 was approaching Kansai International Airport, it attempted to land on runway 24R, which was closed. Thereafter, the aircraft made a go-around and touched down on runway 24L at 22:07.
There were 124 people on board, including the Captain, 16 crewmembers, and 107 passengers but no one was injured.

It is considered highly probable that the serious incident occurred because the Captain and the First Officer assumed 24R to be 24L and approached 24R by mistake after the QATAR AIRWAYS flight QR803 received a landing clearance to 24L while the Aircraft was conducting visual approach to the Airport.

On 1 June 2008, an Airbus A320 registration PK-YVE operated by Metro Batavia Airlines flight 7P591 (Batavia Air) , on a scheduled passenger flight from Jakarta to Medan. The flight departed at 00:10 UTC (07:10 local time) with an estimated arrival time at Medan of...
Read More