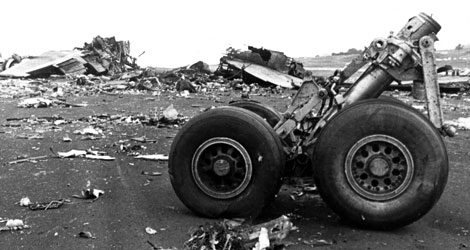 The KLM Boeing 747, registration PH-BUF, took off from Schipol Airport (Amsterdam) at 0900 hours on 27 March 1977, en route to Las Palmas de Gran Canaria. This flight was part of the Charter Series KL 4805/4806 Amsterdam-Las Palmas (Canary Is1ands)-Amsterdam operated by KLM on behalf of the Holland International Travel Group (H.I.N.T.), Rijswijk-Z.H.
The Boeing 747 registration N736PA, flight number 1736, left Los Angeles International Airport, California, United States, on 26 March 1977, local date, at 01292 hours, arriving at John F. Kennedy International Airport at 06172 hours. After the aeroplane was refuelled and a crew change effected, it took off for Las Palmas de Gran Canaria (Spain) at 07422. While the aeroplanes were en route to Las Palmas, a bomb exploded in the airport passenger terminal. On account of this incident and of a warning regarding a possible second bomb, the airport was closed. Therefore, KLM 4805 was diverted to Los Rodeos (Tenerife) Airport, arriving at 13382 on 27 March 1977.
For the same reason, PAA 1736 proceeded to the same airport, which was its alternate, landing at 1415. At first the KLM passengers were not allowed to leave the aeroplane, but after about twenty minutes they were all transported to the terminal building by bus. On alighting from the bus, they received cards identifying them as passengers in transit on Flight KL 4805. Later, all the passengers boarded KLM 4805 expect the H.I.N.T. Company guide, who remained in Tenerife.
When Las Palmas Airport was opened to traffic once more, the PAA crew prepared to proceed to Las Palmas, which was the flight’s planned destination.

When they attempted to taxi on the taxiway leading to runway 12, where they had been parked with four other aeroplanes on account of the congestion caused by the number of flights diverted to Tenerife, they discovered that it was blocked by KLM Boeing 747, Flight 4805, which was located between PAA 1736 and the entrance to the active runway. The first officer and the flight engineer left the aeroplane and measured the clearance left by the KLM aircraft, reaching the conclusion that it was insufficient to allow PAA 1736 to pass by, obliging them to wait until the former had started to taxi. 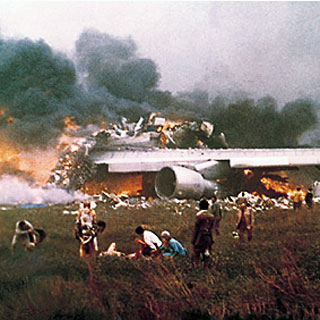 The passengers of PAA 1736 did not leave the aeroplane during the whole time that it remained in the airport. KLM 4805 called the tower at 1656 requesting permission to taxi. It was authorized to do so and at 1658 requested to backtrack on runway 12 for take-off on runway 30. The tower controller first cleared the KLM flight to taxi ‘to the holding position for runway 30 by taxiing down the main runway and leaving it by the (third) taxiway to its left‘. KLM 4805 acknowledged receipt of this message from the tower, stating that it was at that moment taxiing on the runway, which it would leave by the first taxiway in order to proceed to the approach end of runway 30. The tower controller immediately issued an amended clearance, instructing it to continue to taxi that it had received the message , that it would backtrack, and that it was taxiing down the main runway.
The tower signalled its approval, whereupon KLM 4805 immediately asked the tower again if what they had asked it to do was to turn left on taxiway one. The tower replied in the negative and repeated that it should continue on to the end of the runway and there backtrack. Finally, at 1659, KLM 4805 replied, “O.K., sir.”
At 1702, the PAA aeroplane called the tower to request confirmation that it should taxi down the runway. The tower controller confirmed this, also adding that they should leave the runway by the third taxiway to their left. At 1703:00, in reply to the tower controller’s query to KLM 4805 as to how many runway exits they had passed, the latter confirmed that at that moment they were passing by taxiway C-4.

two transmissions took place at the same time. The “stand by for take-off ••• I will call you” from the tower coincided with Pan Am’s “we are still taxiing down the runway”

At the times indicated, the following conversations took place between the tower and the KLM 4805 and PAA 1736 aeroplanes. Times taken from KLM CVR.

Subsequently, KLM 4805, which had released its brakes to start take-off. run 20 seconds before this communication took place, collided with the PAA aeroplane.
The control tower received no further communications from PAA 1736, nor from KLM 4805.
There were no eyewitnesses to the collision.

From all of this it may be ascertained that the KLM 4805 captain, as soon as he heard the ATC clearance, decided to take off.
The fundamental cause of this accident was the fact that the KLM captain:

1. Took off without clearance.

2. Did not obey the “stand by for take-off” from the tower.

3. Did not interrupt take-off when Pan Am reported that they were still on the runway.

4. In reply to the flight engineer’s query-as to whether the Pan Am aeroplane had already left the runway, replied emphatically in the affirmative.

Now, how is it possible that a pilot with the technical capacity and experience of the captain, whose state of mind during the stopover at Tenerife seemed perfectly normal and correct, was able, a few minutes later, to commit a basic error in spite of all the warnings repeatedly addressed to him?

An explanation may be found in a series of factors which possibly contributed to the occurrence of the accident.

1. A growing feeling of tension as the problems for the captain continued to accumulate. He knew that, on account of the strictness in the Netherlands regarding the application of rules on the limitation of duty time, if he did not take off within a relatively short space of time he might have to interrupt the flight – with the consequent upset for his company and inconvenience for the passengers. Moreover, the weather conditions in the airport were getting rapidly worse, which meant that he would either have to take off under his minima or else wait for better conditions and run the risk of exceeding the aforementioned duty-time limit.

2. The special weather conditions in Tenerife must also be considered a factor in themselves. What frequently “makes visibility difficult is not actually fog, whose density and therefore the visibility which it allows can be fairly accurately measured, but rather layers of low-lying clouds which are blown by the wind and therefore cause sudden and radical changes in visibility. The latter can be 0 m at certain moments and change to 500 m or 1 km in a short space of time, only to revert to practically zero a few moments later. These conditions undoubtedly make a pilot’s decisions regarding take-off and landing operations much more difficult.

3. The fact that two transmissions took place at the same time. The “stand by for take-off ••• I will call you” from the tower coincided with Pan Am’s “we are still taxiing down the runway”, which meant that the transmission was not received with all the clarity that might have been desired. The whistling sound which interfered with the communication lasted for about three seconds.

British Midland flight BMA92 left Heathrow Airport for Belfast at 1952 hrs with 8 crew and 118 passengers (including 1 infant) on board . As the aircraft was climbing through 28,300 feet the outer panel of one blade in the fan of the No 1 (left) engine detached. This...
Read More