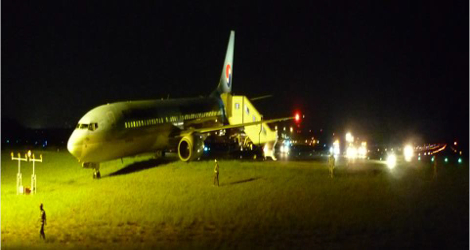 On Monday, August 5, 2013, a Boeing 737-900, registered HL7599, operated as Korean Air flight KAL763 , was unable to stop within the runway 10 in Niigata Airport after landing, and came to rest with the nose gear trespassing into the grass area of the easterly end of the runway at 19:42 Japan Standard Time.

A total of 115 persons on board, including a captain, eight crewmembers, and 106 passengers did not suffer any injuries.

It is highly probable that this serious incident occurred when the Aircraft landed on RWY 10 in Niigata Airport, the Captain of Korean Air flight KAL763 did not let the Aircraft reduce enough lower speed to approach the runway threshold lights that the Captain understood as the stop bar lights for the intersecting RWY 04/22, which the Captain was holding a doubt, and when the Captain realized there was no runway beyond the red lights, the Aircraft could not stop within the runway anymore, resulting in overrunning.

It is highly probable that the reasons why the Captain of Korean Air flight KAL763 understood the runway threshold lights as the stop bar lights for the intersecting RWY 04/22, and why the Captain did not let the Aircraft reduce enough lower speed to approach the lights, are as follows:

It is also somewhat likely that the following reasons contributed to the occurrence of this serious incident: