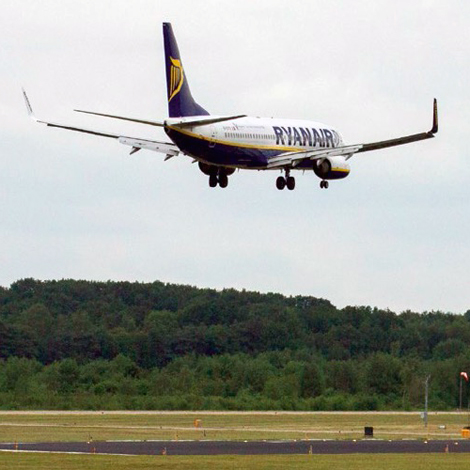 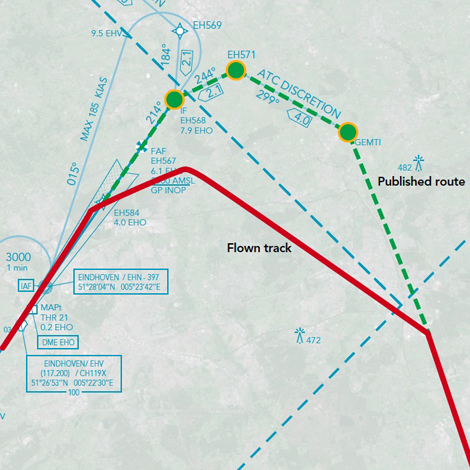 Ryanair flight FR3531 departed from from Palma Mallorca (Spain) to Eindhoven (Netherlands) with 126 passengers and 6 crew.

During the approach to Eindhoven Airport (the Netherlands) on 31 May 2013, Ryanair flight FR3531 a Boeing 737-800 was radar vectored towards runway 21 for a landing using the Instrument Landing System1 (ILS) in Instrument Meteorological Conditions (IMC).

During the approach the aircraft’s rate of descent was less than required and therefore was high in altitude.

After the localiser was captured, a glide slope intercept from above was executed.

The automatic flight director system2 (AFDS) and the autothrottle3 (AT) were engaged.

The approach mode was armed and the aircraft was configured for landing.

At short final, approximately 0.85 NM from the threshold at 1060 feet altitude, the glide slope was captured. Upon glide slope capture, a pitch increase of 24.5 degrees aircraft nose up (ANU) occurred in about 8 seconds.

Ryanair flight FR3531 captured the glide slope at an altitude of 1060 feet at approximately 1 NM from the runway threshold.

The crew pressed the ‘take off/go around’ (TOGA) button for a go around, almost simultaneously followed by the activation of the stick shaker warning. During the following approach to stall recovery manoeuvre there was a second stick shaker activation.

The crew made a successful go around and landed at Eindhoven Airport.

The activation of the aircraft’s stick shaker during an autopilot coupled ILS approach in close proximity to the runway was a factor of interest that prompted the Dutch Safety Board to start an investigation.

Findings from the Eindhoven incident revealed characteristics of ILS signals that were not generally known. During the investigation it became clear that the Eindhoven incident was not unique. Four other incidents with autopilot commanded pitch-up during ILS approaches from above the 3 degree glide slope have occurred. These incidents took place with different types of aircraft, operated by different airlines, on approaches to different airports.

Main causes of the serious accident were :

1. Eindhoven Tower Control, when deciding on the runway in use, did not have information available regarding the upper winds and thus did not take into consideration these winds in the IFR traffic pattern. The choice of landing runway resulted in the aircraft drifting on base leg and encountering a tailwind on final that influenced the rate of decent.

2. Eindhoven Arrival Control had no information about the upper winds . The controller did not take into account the influence of the these winds when giving radar guided approaches. This resulted in a line up too short for the final approach.

3. Eindhoven Arrival Control did not follow the procedures correctly regarding the following:

4. The flight crew did not take into account the influence of the upper winds. In combination with the aircraft’s high vertical profile and high speed in relation to the runway distance, a landing in accordance with standard operating procedures became impossible.

5. The flight crew did not challenge air traffic control and postponed the decision to make a go-around. It is likely that the crew’s high level of confidence in the very reliable automation in the cockpit contributed to this.

6. The flight crew did not have proper guidance procedures to avoid false glide slope capture in relation to the distance to the runway threshold (during an autopilot coupled ILS glide slope approach from above, under instrument meteorological conditions).

8. During an autopilot coupled ILS approach the aircraft, flying at an altitude above the normal 3 degree glide slope, followed the fly-up signal after crossing the 9 degrees false glide slope. This resulted in a nose high position of the aircraft causing the stick shaker warning to occur.

9. The Boeing 737NG Flight Crew Training Manual did not warn of possible false glide slope capture with a pitch-up upset during an autopilot coupled ILS approach. This resulted in an ‘automation surprise’ for the flight crew.

10. The Eindhoven occurrence was initially reported and assessed by the operator as a minor event which did not warrant CVR and FDR retention.