On 13 April 2013, a Boeing 737-800 aircraft registered PK-LKS was being operated by PT Lion Mentari Airlines (Lion Air) on a scheduled passenger flight as LNI 904. The aircraft departed from Husein Sastranegara International Airport (WICC) Bandung at 0545 UTC to Ngurah Rai International Airport (WADD), Bali, Indonesia. There were two pilots and 5 flight attendants with 101 passengers on board consisted of 95 adults, 5 children and 1 infant. The Second in Command (SIC) was the Pilot Flying (PF) and the Pilot in Command (PIC) was the Pilot Monitoring (PM).

The flight from the departure until the start of approach was uneventful.
The aircraft followed the VOR DME runway 09 instrument approach procedure. 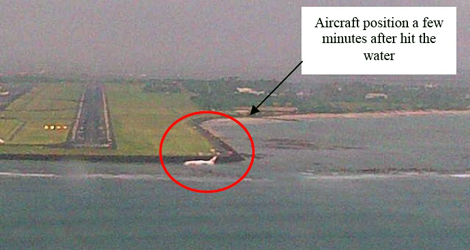 The weather while the aircraft was on final was raining.

At 0708 UTC, when the aircraft was at approximately 1,300 ft, the Ngurah Tower controller saw the aircraft on final and gave a landing clearance with additional information that the wind condition was 120° / 05 knots.

The significant information selected from the CVR, FDR and from the flight crew interview of the circumstances during final approach was as follows: At 0708:56 UTC, while the aircraft altitude was approximately 900 feet AGL the SIC commented that the runway was not in sight whereas the PIC commented “OK. Approach light in sight, continue”.

From the interview, the PIC stated that he saw flashing light at the beginning of runway 09 which was also observed by the SIC later on. Both pilots stated that the weather condition at that time was hazy and the PIC stated that he noticed that on the right side of short final area was dark. At aircraft altitude approximately 550 feet AGL, the PF disengaged the autopilot and the auto throttle then continued to approach. At 0709:47 UTC, the CVR recorded sound similar to rain hitting the windshield. The PIC stated that the outside environment was “totally dark”.

At 0709:53 UTC, while the aircraft altitude approximately 150 feet AGL the PIC took over the control. The SIC handed the control to the PIC and stated that he could not see the runway. At 0710:01 UTC, after the EGPWS warning “TWENTY”, the PIC commanded for go around.

the PIC commanded to go-around at 20 feet, while the FDR did not show any changes required for go-around activation such as: Throttle Lever Angle, TOGA button, aircraft pitch up, and changing of engine parameters. 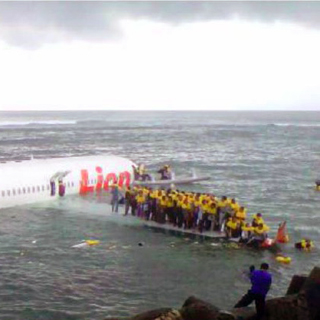 At 0710:02 UTC, the aircraft impacted to the water. The aircraft came to a stop facing north about 20 meters from the shore or approximately 300 meters south west of the runway 09 threshold. The Ngurah Tower controller was informed by a pilot of an aircraft was holding on short runway 09, that the aircraft that was on approach had crash into the sea near the beginning of runway 09.

At 0711 UTC, the Ngurah Tower controller pressed the crash bell. At 0713 UTC, the rescue team departed from the ARFF station and arrived at 0715 UTC. The ARFF deployed 4 units foam tender, 1 unit ambulance and 2 units rescue tender. At 0755 UTC, all aircraft occupants were completely evacuated, the injured passengers were taken to the nearest hospitals and uninjured occupants to the airport crisis centre. Four passengers suffered serious injury and some others were minor or no injury. The aircraft was substantially damaged and submerged into shallow water. The investigation determined that there were no issues with the aircraft and all systems were operating normally. Prior to issuing this final report, the KNKT has been informed several safety actions taken by PT. Lion Mentari Airlines and Ngurah Rai ARFF.

The investigation concluded several factors to this accident are as follows: