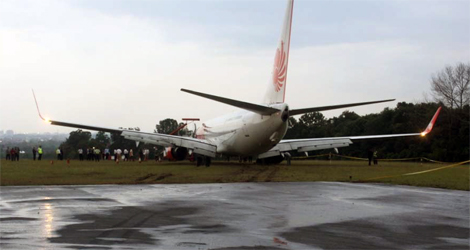 The aircraft departed from Medan at 10.00 UTC

On board of Lion Air flight LNI295 was 226 person, consist of two pilots, one observer pilot, five flight attendants and 218 passengers (212 adults and six infant).

The PIC acted as Pilot Flying (PF) on this flight.

During on route to Pekanbaru, the pilot received weather information from the ATIS informed that the wind was calm, ground visibility 6 km, weather slight rain

The aircraft was vectored to intercept the ILS approach runway 36.

There was information to the Tower controller from the pilot who just landed and informed that the runway was slippery.

After heard this information the PIC changed the auto-brake selection to MAX which was previously set to 3.

At 800 feet the pilot could see the runway.

During final approach, the Tower controller gave clearance to land and informed that the wind was calm.

FDR recorded that the tail wind component during touch down of Lion Air flight LNI295 was 17 knot.

At aircraft altitude below 500 feet, the FDR recorded the tail wind component average of 15 knots. Tailwind was not noticed by pilots in the Computer Display Unit (CDU).

The FDR also revealed that the aircraft was flown below the glide path at aircraft altitude below 300 feet and back to the glide slope at about 50 feet from touchdown.

The aircraft stop approximately 12 meters at the right side from the end of the runway 36.

The passengers disembarked normally through passenger stair. No one injured in this serious incident.

A day before there was a similar aircraft type serious incident of runway excursion during landing on runway 36 Sultan Syarif Kasim II Airport.

The following issues are the significant findings that most probably contribute to this serious incident.

The aircraft did not decelerate according to the preselected value of –0.435 G from the beginning touch down until the aircraft stop due to the decreasing of the calculated airplane braking coefficient that might caused by low skid resistance, rubber deposit and wet runway.