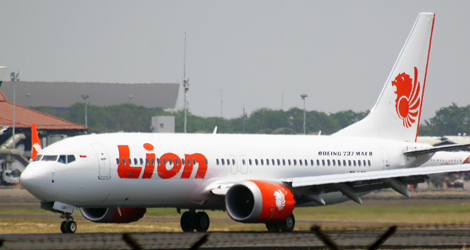 It was a flight operated by Lion Mentari Airlines (Lion Air) with a Boeing 737-8 MAX aircraft registered PK-LQP, and was a scheduled passenger flight from Soekarno-Hatta International Airport (WIII), Jakarta with intended destination of Depati Amir Airport (WIPK), Pangkal Pinang.

When Lion Air flight JT610 disappeared from radar after informing Air Traffic Controller (ATCo) that they had flight control, altitude and airspeed issues.

The aircraft impacted the water in Tanjung Karawang, West Java, all person on board perished and the aircraft destroyed.

On 26 October 2018, the SPD (speed) and ALT (altimeter) flags on the Captain’s primary flight display first occurred on the flight from Tianjin, China to Manado, Indonesia. Following reoccurrence of these problems, the left angle of attack (AOA) sensor was replaced in Denpasar on 28 October 2018.

The installed left AOA sensor had a 21° bias which was undetected during the installation test in Denpasar.

The flight crew was able to stop the repetitive MCAS activation by switched the stabilizer trim to cut out.

After landed in Jakarta, the flight crew reported some malfunctions, but did not include the activation of stick shaker and STAB TRIM to CUT OUT.

The AOA DISAGREE alert was not available on the aircraft therefore, the flight crew did not report it.

The reported problem would only be able to rectify by performing tasks of AOA Disagree.
The following morning on 29 October 2019, the aircraft was operated from Jakarta with intended destination of Depati Amir Airport, Pangkal Pinang. According to the DFDR and the CVR, the flight had same problems as previous flight from Denpasar to Jakarta.

The flight crew of Lion Air flight JT610 started the IAS DISAGREE Non-Normal Checklist (NNC), but did not identify the runaway stabilizer.

The multiple alerts, repetitive MCAS activations, and distractions related to numerous ATC communications contributed to the flight crew difficulties to control the aircraft.

The MCAS was a new feature introduced on the Boeing 737-8 (MAX) to enhance pitch characteristics with flaps up during manual flight in elevated angles of attack.

The investigation considered that the design and certification of this feature was inadequate. The aircraft flight manual and flight crew training did not include information about MCAS.