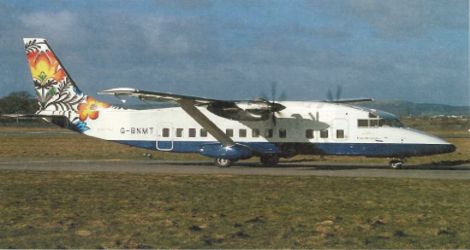 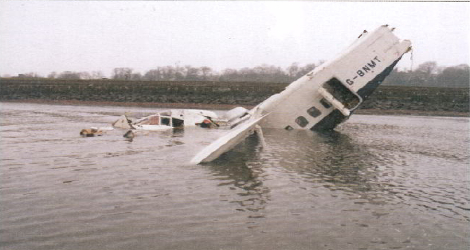 A LOGANAIR flight G-BNMT crew of two was operating the aircraft on a scheduled mail service from Edinburgh Airport to Belfast International Airport, with 1,040 kg of cargo aboard. The aircraft, a twin engined turboprop type, suffered a double engine flameout shortly after takeoff. The flight crew ditched the aircraft in shallow water in the Firth of Forth, close to the shoreline. The aircraft was severely damaged on impact with the water and the forward fuselage section became submerged. Neither crew member survived.

For some 17 hours prior to the accident, the aircraft had been parked on a north-easterly heading, facing into the prevailing strong surface winds, in near freezing conditions. In addition, overnight, there was light to moderate snowfall and drifting.

Tests showed that conditions were ideal for a large build-up of ice, snow or slush to occur in both plenum chambers, where it would not have been readily visible to the crew during a normal pre-flight inspection.

The investigation established that, following a selection by the LOGANAIR flight G-BNMT of the anti-icing systems on the aircraft, specifically the selection of the intake anti-ice vanes, the subsequent movement of the vanes precipitated the near simultaneous engine flameouts. Interaction between the moving vanes and the residual ice, snow or slush contamination in both intake systems is considered to be the most likely cause of the engine failures.