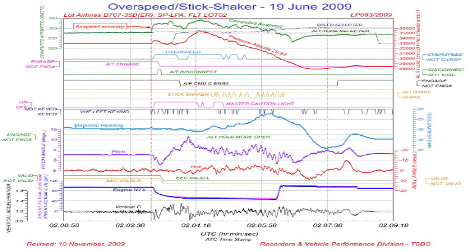 At 2203 Eastern daylight time, while the aircraft was in level cruise flight in the vicinity of North Bay, Ontario, the captain’s airspeed indicator suddenly increased above the maximum operating speed, and an overspeed warning was triggered.

The flight crew of LOT Polish Airlines flight LOT2 reduced thrust to flight idle and initiated a climb. As the aircraft slowed, the overspeed warning stopped.

As the flight crew reacted to the second overspeed warning, a simultaneous activation of the stick shaker occurred.

During the incident , LOT Polish Airlines flight LOT2 climbed from 33 000 to 35 400 feet above sea level (asl) and then descended to approximately 27900 feet agl.

The crew diverted to the Toronto/Lester B. Pearson International Airport where the aircraft landed safely. There was no damage to the aircraft and none of the 10 crew members and 206 passengers were injured.