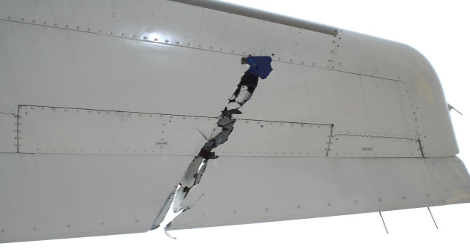 The incident took place in LKPR, between a LUFTHANSA flight DLH5NC and SUN EXPRESS flight SXS5663.

The A321-131 crew stopped at the crossing TWY F and TWY E and after a short hold (ca 5 seconds) went a little bit farther on TWY E.

The distance between the A320 and the A321-131 was established from a radar record of the S-SMGCS system.

All of the schemes presented were processed in an Aero Turn program and the aircraft and the land infrastructure are in the same scale in this report.

TWR-GEC issued an instruction, for operational reasons, “continue to the end please”.

At 08:40:50 the TWR-MMP informed RPL dispatcher about “two airplanes having been “brushed against” each other on TWY E / TWY F intersection asking him to check the intersection for possible debris.

Main cause was identified as Human factor failure – the taxiing crew did not keep a safe separation distance of their airplane from the standing one.