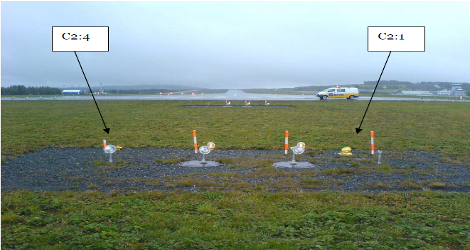 Map Executive Flight Service flight KK7634 was operated with an MD 83 aircraft that was scheduled to perform a charter flight  to Antalya, Turkey : there were 169 passengers and six crew members on board.

At take off, which was made from runway 30, the aircraft became airborne at the end of the runway.

Afterwards it was established that the Map Executive Flight Service flight KK7634 had collided with the approach lights for the opposite runway. Damage had been made to lights and reflective poles up to a distance of 85 meters from the runway end.

The cockpit crew of Map Executive Flight Service flight KK7634 had requested take off from runway 30, due to a more favourable climb out profile from a performance point of view, as there were no obstacles in the climb out direction. The surface wind, which also had been prevailing when the aircraft landed one hour earlier, was though in favour for take off runway 12.

In order to investigate if there were any deviations from the standard weight, SHK carried out a weight survey among the passengers. The result was that the real passenger mass was 568 kilos more than the calculated.

The analyses of the take off also showed that the rotation of the aircraft was initiated late and with too low rotation rate.

The pilots were employed in the company as a part of a business deal when the actual aircraft was leased, and had not passed the normal selection and employment routines. Company training was accomplished, but the Commander had in connection with the take off applied some own procedures that was not in compliance with company rules and policies.

SHK points out in the report that it is probable that the crew prioritized production, and thereby neglecting some flight safety issues, in order to execute the flight.

The incident was caused by deficiencies in the company’s handling of the balance between flight safety and production. These deficiencies lead among other things, to that take off performance calculations was carried out without some limiting factors, implying that the aircraft mass exceeded the maximum allowed under the prevailing conditions.