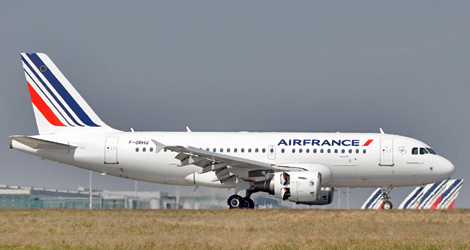 Air France flight AF2184 was operated with an Airbus A319 between Paris Charles de Gaulle and Tunis Carthage.

The briefing was carried out at 5 h 00, takeoff took place at 6 h 53 min.
The Captain was Pilot Flying (PF).
In cruise at FL 350, the PF prepared an arrival for runway 29, in accordance with ATIS indications.

On descent, in V/S mode, he adopted a low vertical speed (- 1,000 ft/ min). The crew contacted the Tunis en route control centre, which confirmed that runway 29 was active.

Six minutes later, the aeroplane passed above the theoretical glide path of 3° for runway 29.

One minute later, during radio contact with Tunis approach, the controller announced that runway 19 was active at that time and requested that they plan for a direct approach.

The PF carried out the briefing for runway 19, at the end of which he noticed that the autopilot was still in V/S mode at – 1,000 ft/min. The change of active runway led to a shortening of the trajectory of about 20 NM in relation to the ILS DME 29 approach, and the gap above the theoretical path of 3° increased from 1,800 ft to about 8,100 ft.

The PF then engaged the OPEN DES mode, selected a speed of 300 kt and extended the air brakes. The aeroplane was at FL 207 and 33 NM from the threshold of runway 19, that is about 10,000 ft above the theoretical path of 3°, at a speed of 276 kt. The crew was cleared for ILS 19 approach. Vertical speed reached was – 5,000 ft/min. Approaching FL 120, 20 NM from the runway threshold, the crew reduced speed by selecting 240 kt, which resulted in the rate of descent being reduced.

Descending through FL 100, 13.5 NM from the threshold, the PF disconnected the autopilot, expecting to obtain greater deployment of the air brakes. Landing gear extension was ordered. The crew had the runway in sight. They established on LOC at 6,000 ft QNH about 8 NM from the runway and at about 250 kt.

The aeroplane was about 3,400 ft above the glide path. The crew applied the procedure for interception from above and selected an altitude of 16,000 ft. This action caused a change in the flight director vertical mode (FD: OPEN DES to V/S) which, from then onwards, indicated a trajectory based on the real vertical speed at the time of the mode reversion (- 4,400 ft).

The PNF explained that he was focused on the stabilisation floor of 500 ft, defined by the operator for an approach in VMC. The FD vertical G/S* mode was engaged 5 seconds afterwards. The aeroplane was then at 3,550 ft, that is 1,700 ft above the glide path. The PNF told the controller that they were established on ILS 19. The altitude was 2,640 ft (that is about 1,000 ft above the path), the distance from the threshold was about 5 NM. The flaps were retracted, the landing gear and air brakes were extended. The speed was 240 kt and vertical speed was – 4,400 ft/min.

The thrust levers were brought back to the idle position, which disconnected the A/THR.

The controller cleared them for landing. Eight seconds later, the PNF announced on the frequency that they were “a little above the path” and requested a 360° turn to the right. The controller had him repeat this request.

During these radio exchanges, the PF reengaged the A/THR and the autopilot so that the latter could intercept the glide path. A GPWS “sink rate” warning was triggered. The G/S mode engaged but the aeroplane passed through the glide path.

The controller cleared them to carry out a 360° turn to the left. The crew extended the flaps in position 1 for the go-around.

The PNF read back the 360° to the left. The PF retracted the air brakes, disengaged the autopilot and made a pitch-up input.

The aeroplane was then at a radio-height of 428 ft.

Two seconds later, the minimum height of 398 ft was recorded. The controller repeated the clearance for a 360° to the left.

The thrust levers were placed in the TO/GA position 13 seconds after selection of flaps 1. The crew carried out a left-hand aerodrome circuit at an altitude of 2,000 ft then a visual approach for runway 19 with ILS support.

They landed without further problems.

The unstabilised approach was due to: