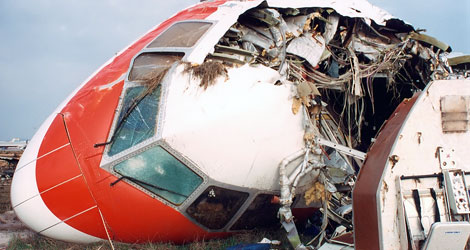 Martinair Holland flight MP495 crashed on 21 December, 1992, a DC-IO-30F aircraft registration PH-MBN, with 327 Passengers and 13 Crewmembers on Board while executing an approach to Runway 11 at Faro Airport, for
a landing.
An active Thunderstorm Formation was approaching the airport.

The aircraft made a hard landing on the left hand side of Runway 11.

The Right Landing Gear fractured, followed by the separation of the Right Wing from the Fuselage, starting a rotation of the aircraft along its longitudinal Axis.

The aircraft slid to the right and off the runway, broke into two main sections and caught fire.
Several passengers and crewmembers were killed.

The commission of inquiry determined that the probable causes for the accident were:

Contributing factors to the accident were: