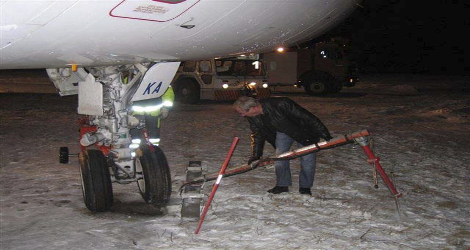 The crew reviewed updated weather and runway status before commencing the approach to ENTO.

When checking in on TWR frequency, the crew of Mytravel Airways Scandinavia flight VKG866 was informed that the runway was contaminated by 8 mm wet snow with a measured (Friction Coefficient, FC) of 32-33-31. These numbers indicated a MEDIUM BA.

The crew of Mytravel Airways Scandinavia flight VKG866 requested wind information in order to check for any crosswind or tailwind limitations. They made a mental consideration regarding the landing conditions and decided that it was acceptable to perform the landing.

The airplane got high on the glide slope after passing 250 ft Radio Height.

This resulted in a touch down approximately 780 metres from the threshold.

After landing the crew experienced POOR BA and suspected a brake failure. The commander took control, pulled the Park Brake (PB) and steered the aircraft with Nose Wheel Steering (NWS) towards the left side of the runway with guidance from the first officer.

The effect of the PB and NWS was that Mytravel Airways Scandinavia flight VKG866 skidded sideways towards the end of the runway 18. This resulted in increased deceleration and the aircraft stopped at the very end of the hard surfaced runway, with the nose wheel against a concrete antennae base.

This incident is similar to several other runway excursions on slippery runways in Norway during the later years. The incidents have many similar causal factors and AIBN does not see any safety benefits of investigating each of these individual incidents. AIBN is therefore working on a general report on winter operations and friction measurements. That report will highlight the common cause factors related in this type of incidents. The report will specifically highlight safety areas of general nature which are outside of the airline operators direct are of responsibility. This incident at Sandefjord Airport Torp is investigated separately in order to highlight the safety areas which Mytravel Airways Scandinavia flight VKG866 (now Thomas Cook Airlines Scandinavia) and Sandefjord Airport Torp have influence on.

AIBN considers that these safety areas should be dealt with before the general report is issued.