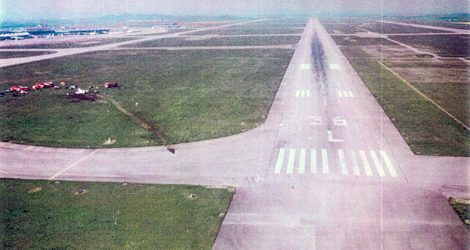 Northern Executive Aviation flight NEX4B , a Learjet 35A registered G-MURI took off from Manchester UK on 2 May 2000 at 9 h 35, for a positioning flight to Farnborough.

At 11 h 22, it left Farnborough bound for Nice as flight number NEX4B with five people and a dog on board.

The crew shut it down and began to descend. They declared an emergency and asked to fly to the nearest aerodrome with a runway longer than one thousand six hundred metres. Lyon-Satolas airport, located about sixty-two nautical miles away left abeam of the aircraft, was proposed.

The descent with one engine shut down towards Lyon-Satolas was undertaken under radar guidance, at a high speed and with a high rate of descent.

At 12 h 35, the pilot stabilised the aircraft at three thousand feet, intercepted the runway 36L ILS and was cleared to land.

The final was started at 233 kt according to radar data and the slow down progressive.

At 12 h 38 min 17 s, he repeated his warning and announced a speed 10 kt above the approach reference speed.

The approach, including its final phase, was never stabilised.

At 12 h 38 min 22 s, the co-pilot again stated that the aircraft was a little low on the approach path and immediately afterwards asked the Captain to increase the thrust.
According to the radar data, the aircraft was then at 900 ft, 0.1 NM from the runway threshold at a speed of 150 kt.

At 12 h 38 min 24 s, the Captain indicated that he was losing control of the aircraft.
The aircraft, over the runway threshold, banked sharply to the left, touched the ground with its wing, crashed and caught fire.

The accident resulted from a loss of yaw and then roll control which appears to be due to a failure to monitor flight symmetry at the time of the thrust increase on the right engine.

The hastiness exhibited by the Captain, and his difficulty in coping with the stress following the engine failure, contributed to this situation.