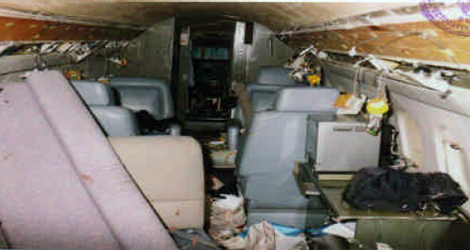 Olympic Airways flight OAL3838 , performed with a Falcon 900B (SX-ECH) from Athens to Bucharest was as a government flight.

During climb after flap and slats were retracted, the flight crew noticed, on the warning panel, the “PITCH FEEL” light came on.
The “PITCH FEEL” warning light, remained continuously ON, during cruise and descent until SLATS were extended.

During descent the Indicated Air Speed (IAS) increased from 240 Kts to 332 Kts. Approaching FL 150, the F/O had a request for a further descent.

One second later, A/P disengaged and for the next 1 minute and 36 seconds the aircraft was manually flown by the PIC.

Between FL 150 and FL 140, for approximately 24 seconds, the aircraft experienced 10 oscillations in pitch axis which exceeded the limit manoeuvring load factor.

Maximum recorded values of the vertical accelerations recorded by an accelerometer located in the landing gear bay were: +4.7 g and -3.26 g.

The impact of the unfasten passengers with cabin ceiling and aircraft furniture, due to accelerations occurring during the pitch oscillations caused fatal injuries to 7 passengers, serious injuries to 1 crew member and 1 passenger and minor injuries to 2 passengers.