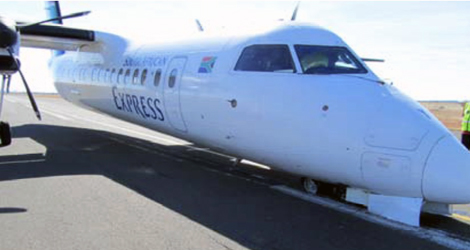 On 16 July 2010 at South African Express Airways flight SA1107, a de Havilland Dash 8 with registration ZS-NLY, collided with a wild animal (aardvark/anteater) shortly after touchdown on runway 20 at Kimberley aerodrome.

The accident occurred at night.

The impact was on the nose landing gear, which caused the nose gear to collapse backwards. The pilot managed to maintain runway heading and the aircraft came to rest approximately 1 200 m from the threshold of runway 02 on the centreline.

Following shutdown, the passengers and crew members disembarked from the aircraft via the main access door located on the left front side of the South African Express Airways flight SA1107.

Aerodrome fire and rescue personnel responded swiftly, following the activation of the crash alarm by the air traffic controller (ATC) in the tower and managed to assist the passengers and crew. Nobody was injured in the accident. All the occupants were transported from the scene/runway to the main terminal building via vehicles.

South African Express Airways flight SA1107 was being operated under the provisions of Part 121 of the Civil Aviation Regulation of 1997 and had departed from O.R. Tambo International aerodrome at 1545Z. Visual meteorological conditions prevailed at the time of the accident flight, which was operated on an instrument flight rules flight plan.

During landing, the nose landing gear of the aircraft collapsed backwards after it had collided with a wild animal on the runway.

The aerodrome fence had been constructed without a proper foundation, which allowed animals to dig holes and trenches underneath the fence in order to gain access to the aerodrome property, thereby easily migrating from one side of the fence to the other.

The fact that a section of the perimeter fence that used to be electrified was disabled due to theft of the solar panel powering the fence, was considered to be a significant contributory factor in the migration of animals along the fence An aardvark and other types of animals were spotted on the aerodrome by ARFF personnel during their runway and taxiway inspections over the period of 12 to 16 July 2010. However, no corrective measures were taken by the aerodrome licence holder to address this shortcoming (i.e., setting traps to catch these animals or bring in professional wildlife capturing teams to catch and relocate these animals).

The open areas between the runways and taxiways were found to consist mainly of savanna-type grassland. The grass was found to be approximately 0.5 m in height, which acted as a good camouflage for several species of animals, making it difficult to observe and track these animals, especially at night.

The fact that aerodrome maintenance personnel members were not on duty over weekends to ensure that the integrity of the perimeter fence had not been jeopardized and if so, to take corrective actions by closing all possible holes/trenches dug underneath the perimeter fence, was considered to be a significant contributory factor to this accident.