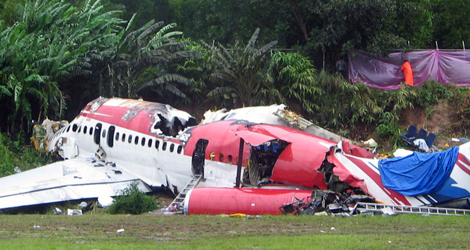 At 15:40:10 hours, during conducting a go-around at Phuket International Airport, the One Two Go Airlines flight OG269 veered off and hit an embankment located in the North of Runway 27, broke up in flames, and was completely destroyed.

As a result, 90 people crew members and passengers died, 26 were seriously injured and 14 suffered minor injuries

The Aircraft Accident Investigation Committee of Thailand (AAIC) conducted an investigation and notified the International Civil Aviation Organization (lCAO) and the National Transportation Safety Board (NTSB) of the United States of America as the State of airplane and engine Design and Manufacture.

In addition, the United States sent accredited representatives from NTSB and Federal Aviation Administration (FAA), as well as advisors from Boeing Commercial Airplanes Company Limited and Pratt & Whitney Company Limited to participate in the investigation.

Moreover, the AAIC notified the representatives of the United Kingdom, Commonwealth of Australia, Japan, France Republic, State of Israel, Northern Ireland, Islamic Republic of Iran, Federal Republic of Germany, and Republic of Indonesia as the States having suffered fatalities or serious injuries to theirs citizens.

The flight crew of One Two Go Airlines flight OG269 did not follow the SOP of Stabilized Approach, Call Out, Go Around, and Emergency Situation as specified in the airlines’ FOM.