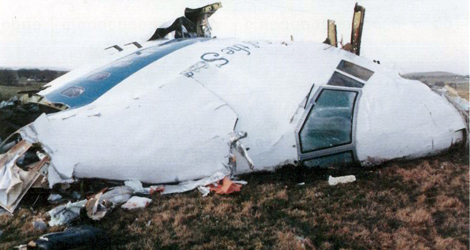 Boeing 747 , N739PA, arrived at London Heathrow Airport from San Francisco and parked on stand Kilo 14, to the south-east of Terminal 3.

Many of the passengers for this aircraft had arrived at Heathrow from Frankfurt, West Germany on a Boeing 727, which was positioned on stand Kilo 16, next to N739PA.

These passengers were transferred with their baggage to N739PA which was to operate the scheduled Flight PA103 to New York Kennedy. Passengers from other flights also joined Flight PA103 at Heathrow.

After a 6 hour turnaround, Pan Am flight PA103 was pushed back from the stand at 18.04 hrs and was cleared to taxy on the inner taxiway to runway 27R. The only relevant Notam warned of work in progress on the outer taxiway . The departure was unremarkable. Flight PA103 took-off at 18.25 h.

As it was approaching the Burnham VOR it took up a radar heading of 3500 and flew below the Bovingdon holding point at 6000 feet. It was then cleared to climb initially to flight level (FL) 120 and subsequently to FL 310.

The aircraft levelled off at FL 310 north west of Pole Hill VOR at 18.56 hrs. Approximately 7 minutes later, Shanwick Oceanic Control transmitted the aircraft’s oceanic clearance but this transmission was not acknowledged.

The secondary radar return from Flight PA103 disappeared from the radar screen during this transmission.
Multiple primary radar returns were then seen fanning out downwind for a considerable distance.

Two major portions of the wreckage of the aircraft fell on the town of Lockerbie; other large parts, including the flight deck and forward fuselage section, landed in the countryside to the east of the town.

Residents of Lockerbie reported that, shortly after 19.00 hrs, there was a rumbling noise like thunder which rapidly increased to deafening proportions like the roar of a jet engine under power. The noise appeared to come from a meteor-like object which was trailing flame and came down in the north-eastern part of the town.

A larger, dark, delta shaped object, resembling an aircraft wing, landed at about the same time in the Sherwood area of the town. The delta shaped object was not on fire while in the air, however, a very large fireball ensued which was of short duration and carried large amounts of debris into the air, the lighter particles being deposited several miles downwind.

Other less well defined objects were seen to land in the area .

An improvised explosive device detonated in luggage container in the forward hold […] The direct explosive forces produced a large hole in the fuselage structure and disrupted the main cabin floor […] the forward fuselage and flight deck area separated from the remaining structure within a period of 2 to 3 seconds.

The in-flight disintegration of the aircraft was caused by the detonation of an improvised explosive device located in a baggage container positioned on the left side of the forward cargo hold at aircraft station 700.