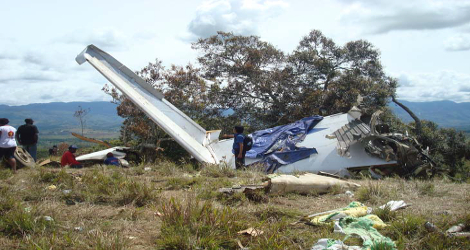 On the morning of 9 April 2009, a British Aerospace BAe 146-300 aircraft, registered PT. AVIASTAR MANDIRI flight PK-BRD was on a scheduled passenger and cargo flight from Sentani Airport to Wamena Airport, Papua. The crew consisted of two pilots, two flight attendants, an engineer, and a load master. The pilot in command (PIC) was the handling pilot and the copilot was the support/monitoring pilot. 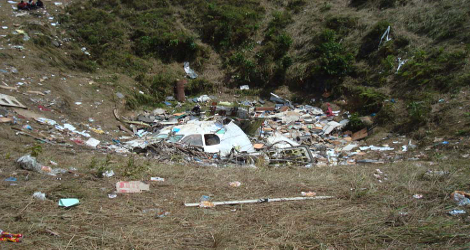 The PT. AVIASTAR MANDIRI flight PK-BRD was being operated under the instrument flight rules (IFR) for the sector from Sentani, and a visual descent, approach and landing at Wamena, because there was no published instrument approach procedure at Wamena.

There was low cloud on the final approach track to runway 15 at Wamena. The aircraft was observed conducting a go around from a low height over the runway. It then climbed to a low height along the extended centreline to the south east, before making a right turn onto a low right downwind leg of the circuit.

Witnesses observed the aircraft continuing on the right downwind, however they did not sight the aircraft on the downwind leg. The flight data recorder (FDR) indicated that the PT. AVIASTAR MANDIRI flight PK-BRD  was flown at a height that was lower than the normally expected. The aircraft made a right turn, onto a right base leg and flew through the extended centerline

During the manoeuvre for the second landing approach, the PT. AVIASTAR MANDIRI flight PK-BRD impacted Pikei Hill3 on Tengah Mountain, 3.55 NM to the north west of Wamena Airport at 0743 local time, (2243 Coordinated Universal Time (UTC4 )). The aircraft was destroyed and the occupants were fatally injured.

The crew did not appear to have awareness of the aircraft’s proximity with terrain until impact with terrain was imminent.

The flight crew did not act on the Enhanced Ground Proximity Warning System aural warnings, and did not conform to the operator’s published operating procedures.

Together, those factors resulted in the aircraft’s impact with terrain.