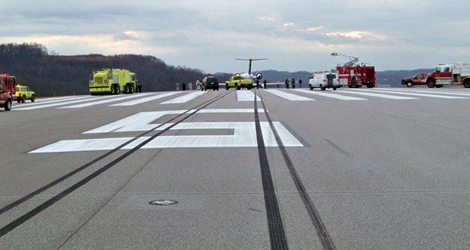 PSA Airlines flight US2495 : on January 19, 2010, the flight crew of PSA Airlines, doing business as US Airways Express flight 2495, rejected the takeoff of a Bombardier CL-600-2B19, N246PS, which subsequently ran off the runway end and then stopped in the engineered materials arresting system (EMAS) installed in the runway end safety area at Yeager Airport (CRW), Charleston, West Virginia.

None of the 31 passengers (including one lap-held child) or 3 crewmembers sustained injuries, and the airplane received minor damage.

The flight was operating under the provisions of 14 Code of Federal Regulations (CFR) Part 121, and its intended destination was Charlotte Douglas International Airport, Charlotte, North Carolina.

The incident flight was the fifth flight for the flight crewmembers in the first day of a 3-day trip sequence, and they were scheduled to be on the ground at CRW for about 30 minutes.

The first officer stated that, during that time, he completed a walk-around inspection of the airplane and received the takeoff performance data via the aircraft communications addressing and reporting system (ACARS).
The ACARS performance data included the following:

The captain was the flying pilot for the incident flight. According to cockpit voice recorder (CVR) information, the flight crew completed the Before Start checklist at 1554:25. (All times in this report are eastern standard time based on a 24-hour clock.)

At 1558:51, the captain made a public address announcement indicating that the departure would be delayed about 15 minutes. At 1602:35, the first officer notified the local controller (LC) that the airplane was ready to taxi, and the LC instructed the flight crew to hold the airplane on the ramp.

About 1 minute later, the flight crew started a personal conversation (that is, a conversation not pertinent to the operation of the airplane) after setting the parking brake, and this conversation continued until 1607:32 when the LC instructed the flight crew to taxi to runway 23. (The LC was working both the ground and local positions.)

Flight data recorder (FDR) data indicated that, 1 second later, the parking brake was released and the airplane began to taxi.

At 1607:40, the captain continued the nonpertinent conversation.

At 1608:44, the captain stated, “flaps twenty,” and then called for the Taxi checklist. FDR data indicated that, 1 second later, the flaps moved from the flaps 0 to the flaps 8 position.

At 1609:02, the first officer began the Taxi Checklist, during which he stated, “flaps eight,” and the captain responded, “set.”

At 1612:18, the first officer continued the Before Takeoff checklist, stating, in part, “takeoff briefing. No questions.”

The first officer completed the checklist at 1612:27. FDR data showed the airplane heading aligning with the runway heading and the engine thrust increasing to takeoff thrust at 1612:50.

FDR data showed that, at 1613:20, the flaps position began moving from the flaps 8 toward the flaps 20 position and the speed was about 120 knots.

Two seconds later, the CVR recorded the sound of the airplane master warning and then the flaps and spoilers configuration aural alerts. FDR data showed that, at 1613:25, both engine fan speeds began decreasing, the flight and ground spoilers were extended, and both of the captain’s brake pedals were depressed.

The National Transportation Safety Board determines the probable cause(s) of this incident as follows.