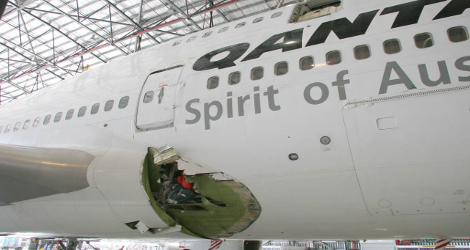 On board the aircraft  (operating as flight number QF30) were 350 passengers (including four infants), 16  cabin crew and three flight crew (captain, first officer and second officer).

The QANTAS flight QF30 crew reported that the departure and climb¬out from Hong Kong was  normal, with the aircraft established at the assigned cruising altitude of 29,000 ft  (FL290) by 0942 (0142 UTC).

At 1017 (0217 UTC), the captain and first officer reported hearing a ‘loud bang or  cracking sound’, with an associated airframe jolt. At that time, the autopilot  disconnected and the first officer, who was the pilot flying at the time, assumed  manual control of the aircraft. Multiple EICAS  messages were displayed, including  warnings regarding the R2  door status and cabin altitude . The second officer, who  was in the forward crew rest position, returned to the first observer’s crew seat and  all flight crew donned oxygen masks before completing the ‘cabin altitude non normal’ checklist. At that time, the aircraft was approximately 475 km to the northwest of Manila, Philippines.

The cabin crew reported that shortly after the bang was heard, oxygen masks fell  from most of the personal service units in the ceiling above passenger seats and in  the toilets. Most passengers started using the oxygen masks soon after they  dropped. All cabin crew, who were engaged in passenger service activities at the  time, immediately located oxygen masks to use. Some crew located a spare  passenger mask and sat in between passengers, while others went to a crew jumpseat at an exit, and one used a mask in a toilet.

Approximately 20 seconds after the event, the flight crew reduced the thrust on all  four engines and extended the speed brakes. An emergency descent was  commenced and a MAYDAY  declared on the Manila flight information region  (FIR) radio frequency

At 1024 (0224 UTC), the aircraft reached, and was levelled at an altitude of 10,000  ft, where the use of supplementary oxygen by passengers and crew was no longer  required.

The QANTAS flight QF30 crew reported that at all times during the ensuing descent into Manila, they were able to maintain the aircraft in visual flight conditions. Following radar  vectoring from Manila air traffic control, the captain, who had assumed the pilot  flying role, conducted an uneventful approach and landing on runway 06, with a  smooth touchdown, full reverse thrust and minimal braking. Emergency services  were in attendance after the aircraft was stopped on the runway, after which  intercom contact was made with a ground engineer and the aircraft verified as being  safe to tow to the airport terminal and disembark the passengers via a terminal air-bridge.

A total of five adjacent  longitudinal stringers (32 to 36) and two adjacent circumferential frames (800 and  820) had been structurally compromised during the fuselage rupture event.

The physical damage sustained was entirely consistent with a localised, outwardsforcing explosive event, with all fracture surfaces examined showing typical ductile  tearing and tensile overstress features. An outward and upward¬folded flap of  fuselage skin at the top of the ruptured area and encompassing fuselage stringers 32  and 33, showed clear outward bulging and deformation – that skin had been located  immediately behind the lower part of the number 4 passenger oxygen cylinder.