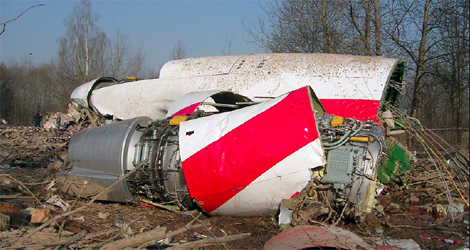 Republic of Poland flight PLF101 : on March 30, 2010 the Third European Department of the Ministry of Foreign Affairs, Russian Federation was sent an additional letter PdS 10-20-2010 from the Embassy of the Republic of Poland with one more request to conduct a non-scheduled (single) flight in the Russian airspace on April 7, 2010.

The request was also agreed upon by the Department of Management and Control of the VIP flights of the Russian CAA on April 1, 2010. The flight was assigned Category K. Additionally on the basis of Letter PdS 10-21-2010 of the Embassy of the Republic of Poland in the Russian Federation of April 1, 2010 the arrival of three CASA-295M aircraft was arranged for April 7. Actually on April 7 thee flights arrived at Smolensk “Severny” Airdrome: one on Tu-154M (PLF 102), one on Yak-40 (PLF 035) and two on CASA-295M.

On April 10, 2010 the crew of the special air regiment of the Polish Air Forces including the PIC, the co-pilot, the navigator and the flight engineer conducted a non-scheduled international flight PLF 101 Category “А” on Tu-154M tail number 101 carrying passengers from Warsaw (EPWA) to Smolensk “Severny” (XUBS).

There was no leaderman-navigator on board the aircraft.
Besides the 4 flight crew members there were 3 cabin crew members, 88 passengers and 1 security officer on board making a total of 96 persons, all citizens of the Republic of Poland.
According to the first request for flight the departure from Warsaw was planned for 8:30. However later the flight plan was modified and the departure time was shifted to 9:00. The takeoff from Warsaw was actually conducted at 09:27 with a delay of 27 minutes as per the modified flight plan.

The cruise flight was conducted on FL330 (~10000 m).
At 10:09:30 being controlled by the Minsk Control the crew requested estimated descent to 3900 m which was cleared. At 10:14:30 during the descent the Minsk Control informed the crew that the visibility at Smolensk “Severny” Airdrome was 400 m, fog.

During the approach of the Yak-40 the weather started getting worse (at 9:00 the visibility was 4 km, while at 9:06 it decreased to 2 km) as the fog that had started to form in parts of Tula, Kaluga and Smolensk Regions after 04:00 was drifting from the south-east to the north-west. During the two approaches of the Russian IL-76 aircraft tail number 78817 (from 09:20 to 09:39) the weather conditions at Smolensk “Severny” Airdrome were getting still worse.

Making two approach attempts the IL-76 proceeded to an alternate airdrome in Moscow. The weather measurements taken at 09:40 showed that the weather conditions (visibility 800 m, cloudbase 80 m) got below the airdrome minima (100×1000) for landing at RWY 26 using the radar + 2NDB landing system.

In addition he informed that the temperature was +2º C and the QNH was 745 mm mercury.

Despite the actual weather that was below the airdrome, PIC’s and aircraft minima, at 10:25 the crew requested a “trial” approach.

Considering the provisions of the Russian AIP, the Controller cleared the crew to approach but later warned the crew not to descent below 100 m and required them to be ready for missed approach from that altitude.

In the course of further descent and flight at circuit altitude (500 m QFE) the crew of the PLF 101 flight contacted the crew of the Yak-40 (PLF 031 flight) that had landed earlier. The Yak- 40 crew several times informed the crew of the Tu-154M on the unfavorable weather conditions, last warning given before the latter approached the final turn.

The Yak-40 crew transmitted that the visibility at the airdrome was 200m. The Tu-154M crew continued approach and final descent.
At a distance of 1100 m from RWY 26 threshold and about 35 m left from the extended runway centerline the aircraft first hit the top of a tree at a height of about 11 m above ground level.

The impact occurred before the middle marker (1050 m distance from RWY 26 threshold). The terrain elevation in the middle marker area is 233 m, the RWY 26 threshold elevation is 258 m. Thus, at the time of the impact the aircraft was about 15 m below the RWY 26 threshold. Further, 245m from the point of the first impact with a lateral deviation of about 60m left from the extended runway centerline the aircraft hit a birch with the trunk 30-40m cm wide which led to the damaged left wing and significant left bank.

Further the aircraft crashed inverted and was totally destroyed. The emerging insignificant ground fire at the accident site was extinguished by the arriving fire fighters 18 minutes after the accident. As a result of the crash all the passengers and crew members on board died.

The immediate cause of the accident was the failure of the crew to take a timely decision to proceed to an alternate airdrome although they were numerous times timely informed on the actual weather conditions at Smolensk “Severny” Airdrome that were significantly lower than the established airdrome minima; descent without visual contact with ground references to an altitude much lower than minimum descent altitude for go around (100 m) in order to establish visual flight as well as no reaction to the numerous TAWS warnings which led to controlled flight into terrain, aircraft destruction and death of the crew and passengers.

According to the conclusion made by the pilot-experts and aviation psychologists, the presence of the Commander-in-Chief of the Polish Air Forces54 in the cockpit until the collision exposed psychological pressure on the PIC’s decision to continue descent in the conditions of unjustified risk with a dominating aim of landing at any means.

Contributing factors to the accident were: – long discussion of the Tu-154M crew with the Protocol Director and crew of the Polish Yak-40 concerning the information on the actual weather that was lower than the established minima and impossibility (according to the Tu-154M crew opinion) to land at the destination airdrome which increased the psychological stress of the crew and made the PIC experience psychological clash of motives: on the one hand he realized that landing in such conditions was unsafe, on the other hand he faced strong motivation to land exactly at the destination airdrome.

In case of proceeding to an alternate airdrome the PIC expected negative reaction from the Main Passenger; – lack of compliance to the SOP and lack of CRM in the crew; – a significant break in flights in complicated weather conditions (corresponding to his weather minima 60х800) that the PIC had had as well as his low experience in conducting nonprecision approach; – early transition by the navigator to the altitude callouts on the basis of the radio altimeter indications without considering the uneven terrain; – conducting flight with engaged autopilot and autothrottle down to altitudes much lower than the minimum descent altitude which does not comply with the FCOM provisions; – late start of final descent which resulted in increased vertical speed of descent the crew had to maintain.