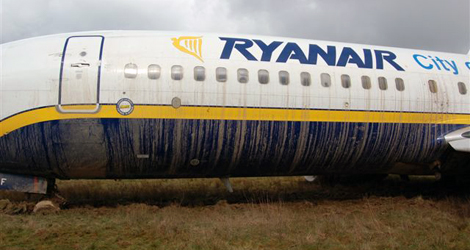 Ryanair flight FR1216 was coming from Belgium, was supposed to stop for 25 minutes at Limoges-Bellegarde aerodrome , without refuelling, then return to Belgium with more passengers. The copilot was PF on the leg. The ATIS information at 14 h 01, heard by the crew, stated that runway 21 was in service, that the wind was from 280° at 13 kt with gusts to 25 kt, and mentioned light rain and mist.

On the onboard weather radar, the crew identified a zone with high water content near the aerodrome. During the descent, below 6,000 feet altitude, they could see this precipitation. Thinking that these showers would probably reach the aerodrome at the time of landing, the crew asked the controller for an option, in case of missed approach, to climb on the extended centreline up to 4,000 feet. The controller accepted the request. On long final at 3,000 feet, the airplane was offset to the left of the extended centreline with a right crosswind of around fifty knots. The rain intensified, so the crew switched on the windscreen wipers and selected auto-braking on position “3“. When the airplane was 4 NM out on final, established on the ILS axis, the controller cleared it for landing on runway 21, announced a wind from 330° at 20 kt with gusts to 35 kt, and indicated that the runway was wet. The crew acknowledged without reading back and continued the approach. At a height of 300 ft, the PF disconnected the autopilot and auto-thrust. During the flare, while the rain was intensifying on the runway, the Captain took control of the airplane. The airplane touched down on the runway to the left of the centreline. The spoilers deployed immediately and reverse thrust applied without delay.

Experiencing some difficulty in getting back onto the runway centreline, the Captain placed the thrust levers in “REVERSE IDLE“ to facilitate this, then switched to manual braking and again selected the thrust reversers to 80% of N1.

The airplane overran the runway at a speed of about 45 kt, then came to a stop around fifty metres past the runway end. The Captain called for an emergency evacuation. The engines were damaged by the ingestion of earth and stones and the airplane was bogged down. Extensive excavation work was required in order to be able to tow the airplane back to the runway.

The landing distance during flight preparation is of the order of 1,000 metres. The regulations make it mandatory to apply a first coefficient of 1.67 on a dry runway, then a second of 1.15 on wet runway. Thus, the resulting landing distance, of the order of 1,920 metres, appears to offer a high safety margin. This calculation is mainly used to take into account any possible limitations on airplane departure in relation to the conditions forecast for landing.

Ryanair flight FR1216 crossed the threshold with a ground speed of 160 its , calculated tailwind was 8 kts : it touched down 690 meters after the displaced threshold with 1750 meters remaining.

In flight, crews use performance data on landing closer to reality to evaluate the possibility of landing in comparison to the transmitted conditions. Subsequently, many parameters have an influence during the course of the landing, which can increase the real stopping distance of the airplane.

The accumulated effect of several unfavourable factors can lead to a significant reduction, or even the elimination of margins and finally to a runway overrun:  The published landing performance values take into account passing over the threshold at 50 feet, and thus an aiming point 300 metres from the threshold. However, for all runways over 2,400 metres with no PAPI, the marks that represent the visual flight path aiming point are located at 400 metres.

The instructions for landing in case of a storm or a storm cell nearby determine the limits for undertaking the approach. This event shows that other meteorological phenomena can affect landing. The passage of a cold front causes rapid variations in wind direction and intensity, generally accompanied by heavy precipitation.  If the wind moves round and becomes a tailwind, the touchdown point can be moved, and the speed and the landing distances increased.  Crosswind can make lateral control difficult, and oblige the crew to defer using the thrust reversers. 

Precipitation can temporarily be greater than that transmitted and downgrade runway adherence.

The crew were not fully aware neither of the intensity of the precipitation and condition of the runway, nor of the change in the wind direction. The controller had transmitted information on this subject, with the wet runway and the wind direction, though his message did not underline recent changes (wind rotation and strengthening precipitation). The relatively neutral form of this message did not warn the crew.

In conclusion, the regulatory margins, which appear to be adequate in normal conditions on a dry runway, can be considerably reduced or eliminated when a change in the meteorological conditions leads to an accumulation of unfavourable factors. Information on these changes, which can affect flight safety, is essential to crew decision-making.