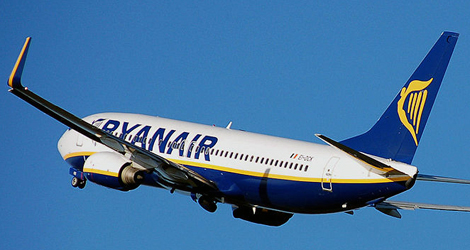 The major part of the flight was operationally uneventful until the approach phase to Ireland West was commenced.

Here, some confusion arose with the cockpit crew as to the Runway (RWY) in use for landing.
They had initially flight planned for RWY 09 but the EIKN Air Traffic Control (ATC) advised that their requested Non Directional Beacon (NDB) approach to RWY 09 was unavailable and cleared them for an Instrument Landing System (ILS) approach to RWY 27, from which they could carry out a Circling Approach to RWY 09.

This ATC information led to an ILS approach to RWY 27 with the aircraft incorrectly configured.

The approach was abandoned at about 400 feet above ground level (AGL), as the crew became visual with RWY 27, and a go-around was carried out. About this time, also, the Enhanced Ground Proximity Warning System (EGPWS) sounded.

During first approach of Ryanair flight RYR9853 , the EGPWS warning mode 4 ( “Too low terrain” ) sounded at 410 ft  AGL when the airplane speed was 265 knots.

The aircraft was then flown to the Oscar Kilo (OK) NDB where the crew joined the holding pattern at that beacon.
Subsequently, from there, the crew carried out a second ILS approach to RWY 27, followed by a Circling Approach to RWY 09, from which a normal landing was carried out.

The AAIU was advised of this Serious Incident on 4 April 2006 by the Operator.